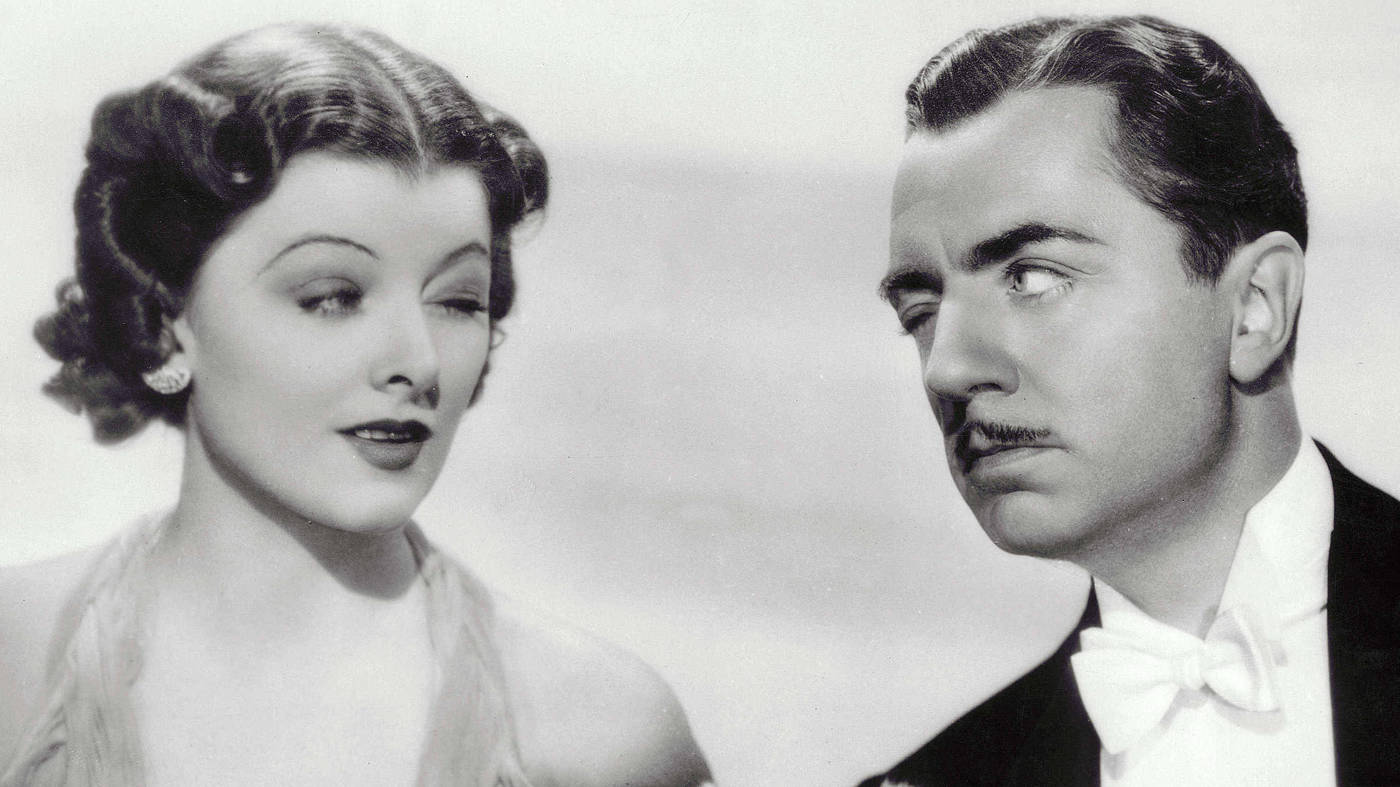 After only 20 minutes into The Thin Man, Alex eagerly grabbed his computer to look it up on RottenTomatoes.com. “This had five sequels,” he announced.  “And all of them were certified fresh!”  This movie absolutely earned that urge for tell me more about this, please.

The Thin Man was the first film to feature William Powell and Myrna Loy as Nick and Nora Charles, a witty, urbane mystery-solving couple.  They pretty much have a dream life; Nick is a detective who retired when he married heiress Nora, and now the pair spend their days traveling, throwing boisterous dinner parties, and looking after their fox terrier Asta.

Nick is actually not the “thin man” referred to in the title – that reference actually applies to inventor Clyde Wynat (Edward Ellis), whose disappearance is the film’s central mystery. Nick is an old family friend of the Wynats, and Clyde’s adult daughter Dorothy (Maureen O’Sullivan) begs him to come out of retirement and help find her father. Nora joins in the persuasion, insisting that she’s never seen him at work and thinks it’d be fun.  Nick is initially reluctant, but as he hears about how the police are handling the case, something just doesn’t quite add up…

The mystery plot unfolded nicely, but was pretty damn complicated.  There were four or five completely different people who had a stake in killing Clyde – from an ex-wife, to a current wife, to work colleagues and rivals and even a gangster – and Clyde had just as many reasons to kill any of them and go into hiding.  Nick persists, gradually uncovering all the clues (sometimes before we even realize they are clues!) and then hosting a lavish dinner party for all the suspects, with the police in attendance, where he unravels the whole plot to the astonished guests before naming his suspect.  “….I have no idea which one did it,” Alex confessed as the scene started.  Neither did I – I announced a guess two minutes into the scene, but then changed my guess two minutes later as Nick unwound more of the plot.  But for the life of me I couldn’t tell you why – maybe, as Nick covertly whispers to Nora midway through his speech, “it’s the only way things make sense!”

If you’re not a mystery fan, never fear – you still get to watch Nick and Nora, a delight all on its own.  They’re smart, they’re lively, they’re constantly flirting with each other – and they are incredibly witty. Some of the scenes even include a little ad-libbing from Powell and Loy, including a bit in the bar where Powell is expounding upon the proper method for shaking cocktails.  On set, director W. S. Van Dyke was running some light tests at one point and asked Powell to quickly run through the scene; Powell got caught up in the fun and ad-libbed a whole riff about different cocktails requiring different shaking rhythms.  When he was just about done, he was startled to hear Van Dyke shouting “Cut!  Print that!”  Van Dyke had been so taken with his new dialogue that he’d asked the camera crew to start filming.

Most of the written script was adapted from Dasheill Hammett’s novel, and most of the dialogue is simply Nick and Nora riffing off each other:

(after Nick has a narrow escape)

Nick: I’m a hero. I was shot twice in the Tribune.
Nora: I read that you were shot five times in the tabloids.
Nick: It’s not true. He didn’t come anywhere near my tabloids.

(After Nick diverts Nora from trying to “help him” on the case by sending her to Grants’ Tomb):

Nick: How’d you like Grant’s tomb?
Nora: It’s lovely. I’m having a copy made for you.

(After hearing about the case):

Nora: You know, that sounds like an interesting case. Why don’t you take it?
Nick: I haven’t the time. I’m much too busy seeing that you don’t lose any of the money I married you for.

(Their very first exchange in the film, at a bar):

Nora: How many drinks have you had?
Nick: This will make six Martinis.
Nora: All right. (to the waiter) Will you bring me five more Martinis, Leo? Line them right up here.

….That last bit illustrates the one and only part of the film that made me uneasy; Nick and Nora drink a lot throughout.  No, really, a lot.  From the bar where Nora orders five martinis to catch up with Nick, to a cocktail party where both carry trays of drinks to press on their guests, to each nearly instinctively offering each other a drink upon waking (and then secretly stealing each other’s drinks a couple minutes later) – there is enough evidence to accuse the Charles’ of being functional alcoholics. But save for one jokey moment after the first bar scene where Nora is depicted with a hangover (“What hit me?” she groans; “That last martini,” Nick answers), their drinking doesn’t seem to affect them at all. Other characters, sure; but Nick and Nora?  Never. They’re such a delight that they just seem like fun party people, able to “maintain” even when everyone else around them is getting sloppy.  Still, by the end I found myself wishing they’d slow down a little.

(I just discovered someone has actually come up with a Thin Man drinking game, which seems like the height of masochism.) 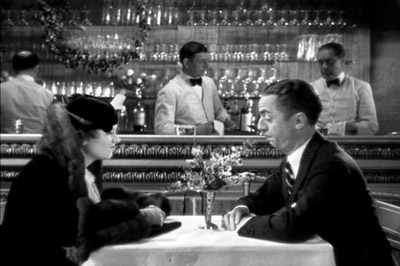 On the other hand, Nora proves herself an even match for Nick – in wit and style and bravery – which made for a really nice foil after It Happened One Night.  Both Nora and that last film’s Ellie were heiresses; but where Ellie was sheltered and naive, Nora is smart, tough, and independent.  It helps that Nick seems to appreciate Nora; he pokes fun, but you can tell it’s teasing born of genuine affection and admiration.  These two feel like equals.

Nick and Nora survive it all well – the events of the film and the partying – and go on to those five other films, all starting Powell and Loy. And dangit, I wanna watch.