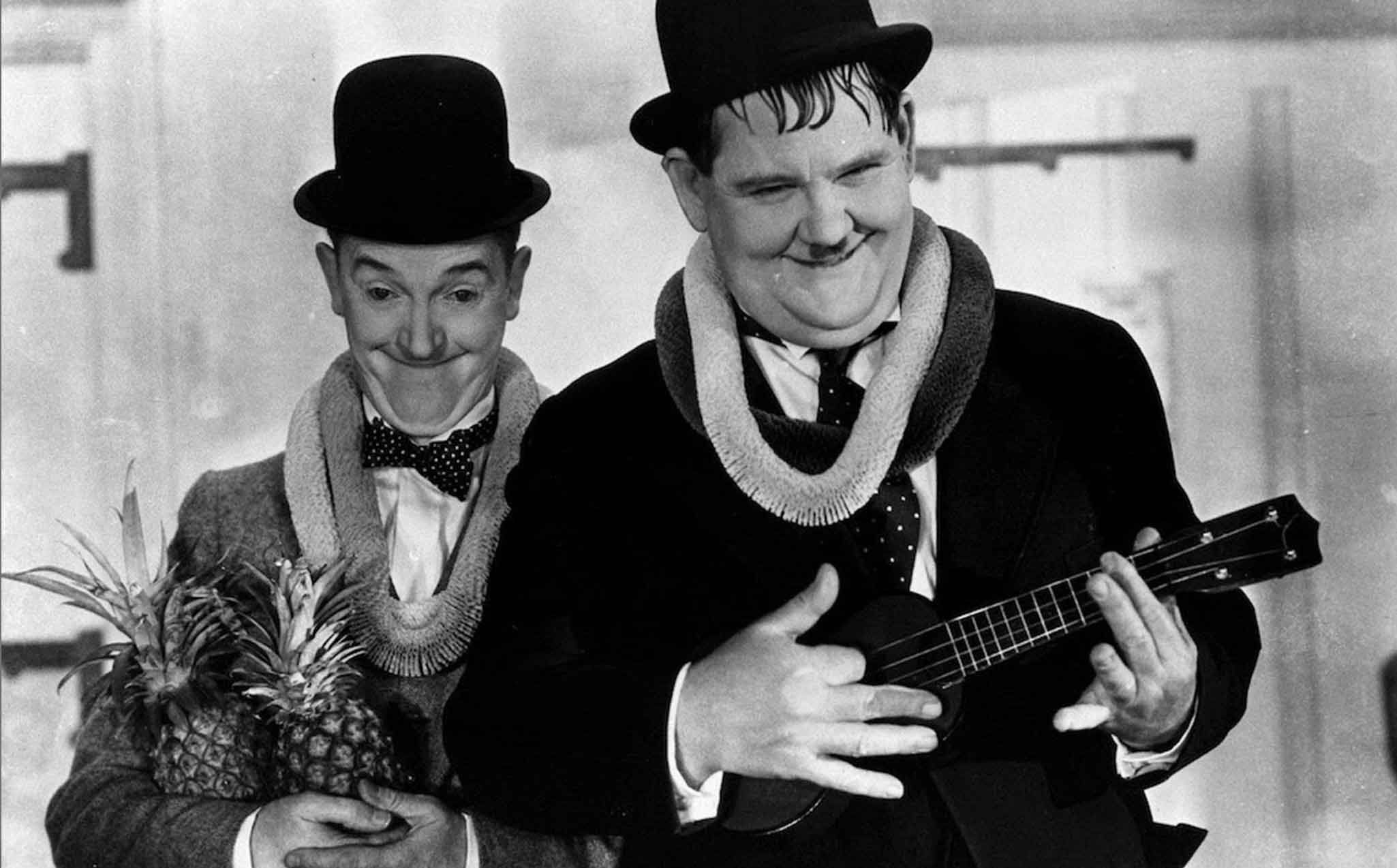 The title Sons of the Desert gave me a very incorrect idea about what this Laurel And Hardy film was going to be.  I thought it was going to be a sort of French-foreign-legion spoof; instead, Stan and Oliver play a pair of henpecked husbands intent on heading to Chicago for the national convention for their fraternal organization.  Stan is unsure his wife will allow him to attend; but Ollie is appalled he’s even asking. “Why don’t you pattern your life after mine?” he lectures Stan. “I go places and do things and then tell my wife. Every man should be the king in his own castle!”

However, Ollie’s wife Lottie finds out about the convention – and reminds Ollie that she had already booked them a weeks’ stay in an exclusive mountain resort that same week. So no convention for him.  When he tries to put his foot down, she insists on the mountain trip – by throwing a dish at his head.

So the pair concoct a plan – Ollie pretends to be sick, and Stan enlists a doctor to “prescribe” a cruise to Honolulu as a rest cure.  And hey, since Lottie hates cruises – how about she go ahead to the mountains with Stan’s wife Betty, and Stan can go with Ollie instead?  The wives agree, and as soon as they’re gone, the men hightail it to Chicago.

While the men are whooping it up at the convention, however, Betty and Lottie come back to learn that the cruise ship has foundered during a storm at sea, and their husbands’ lives may be in danger. Some of the survivors made it onto a rescue ship, but until the ship returns, they won’t know who made it and who drowned.  The wives go to a movie to keep themselves distracted while they wait – and just so happen to see a newsreel about the Sons of The Desert convention…

I’m not that crazy about the whole “henpecked husband” trope as a rule, but there were enough wacky hijinks and little surprises in this that I was caught off guard.  There was a whole sequence founded on Stan and Ollie’s houses being next door to each other and sharing a back yard, and Stan thus getting confused which house he lives in, which is nearly impossible for me to explain – but which they found more and more unpredictable ways to play with, making for a whole delicious five minutes of schtick.  Another lengthy sequence has Stan trying to “steal” bites from a bowl of wax fruit Lottie has on display – it’s really just a single gag stretched out for a few minutes, but the looks on Stan Laurel’s face as he tries to chew a bite from a wax apple were funny enough that I didn’t care (and Lottie has a great punch line at the end).

And then there is Betty.  Stan’s wife is ultimately a minor character, and we’re just meant to see her as a threat to Stan.  But the way they’ve decided to make her seem threatening is to make her a hunter and markswoman – which makes her all the more interesting.  When Stan and Ollie first come in to break the news of the convention, Betty isn’t home – she’s left a note that she’ll be home late, since she has gone duck hunting.  She shows up about ten minutes later with a whole brace of ducks, one of which she cheerfully gives to Lottie as a present before she leaves with Stan.  And later, when she and Lottie think they hear burglars in their attic, Betty just grabs her gun and storms up the ladder to flush out the invaders.  It was obvious that we were supposed to be afraid of her because of the gun, but I wanted to know way more about her.

This is the only Laurel and Hardy film on the 1001 Movies list, and I had the great fortune of seeing it in a theater, along with one of Laurel and Hardy’s newly-restored shorts.  New York’s Film Forum theater included it as part of its Sunday matinee series for kids; so there were a lot of little film fans in the audience, laughing at all of the slapstick throughout.  The short got the most laughs of all – a once-lost short called The Fight of the Century, which ends with a whole city block getting caught up in a pie fight.