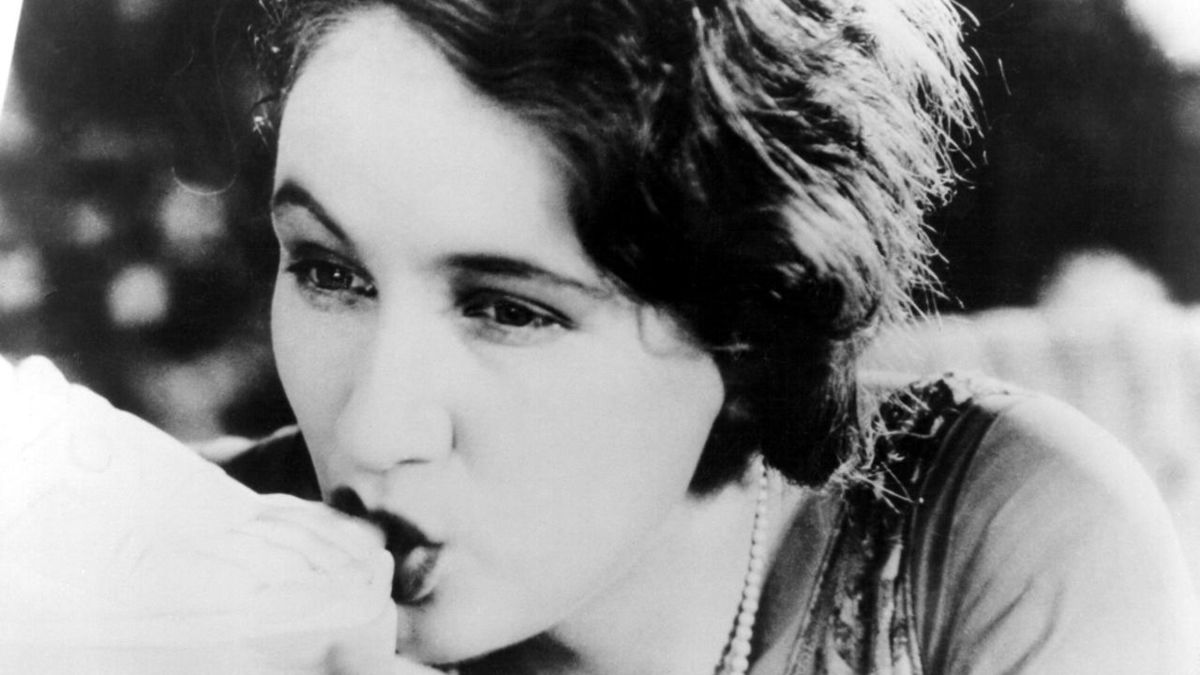 After Un Chien Andalou, this the second collaboration between Luis Bunuel and Salvador Dali. This time, however, Dali contributed a little less to the party and let Bunuel go his own way; there’s a tiny bit more of a plot (……sort of), and fortunately no one’s eyes are harmed in the making of this film.

Things actually start off with a brief documentary about scorpions; we see plenty of scenes of them scorping along and doing their thing, set to sprightly orchestral music and interspersed with intertitles giving us facts about scorpion anatomy, mating habits, and the like.  After about five minutes or so, we get the caption “a short while later,” and suddenly we’re following a guy dressed in rags picking his way up a rocky hill.  The film follows his story for a while – and then drops him to follow the courtship of a well-to-do couple with some unique sexual habits who run into each other at a party and sneak off to the garden for an attempted hookup. And then the film jumps yet one more place at the very end.

The whole thing reminded me strangely of your average episode of Monty Python’s Flying Circus.  Their episodes often had a series of sketches strung together by the most tenuous of links – sometimes a character from one sketch would leave, the camera following him, until he walked on set for the next sketch, and it started. Or Terry Gilliam’s animation would be the link connecting one bit to the next.  L’Age D’Or is structured much the same way, with the man in rags encountering a group of dignitaries arriving at a beach by boat; the dignitaries are the next “sketch”, all come to witness a pompous official lay the cornerstone of a monument.  But his speech is interrupted by a man in the crowd – who is then escorted off the beach and into town, with the camera following him all the way into the next sketch; since he is the man in the courting couple.

Similarly, just like Python loved to inject elements of the surreal just into the background of their sketches, Bunel loved to interject things into the background for shock effect or just to confuse people – like the raggedy man spotting a group of bishops huddled together in prayer on the beach.  Or the woman from the courting couple walking into her bedroom to dress for the party – and shooing away a cow that had curled up on her bed like it was a lap dog.

Terry Gilliam is supposed to be a Bunel fan, though, so there’s probably cause for the comparison in surrealism.

What flipped audiences out at the time, though, was the sex. Not that we see any sex outright – but it’s really heavily implied, especially with the courting couple. There’s no nudity, but there is some very suggestive caressing, and kissing.  And….finger sucking.

At its French premiere,  which was held at a French studio, a group calling itself the Ligue des Patriotes (the League of Patriots) threw ink and paint at the screen during the film, then ran out to the lobby and started to destroy any artwork they saw by Dali, in protest.  The Spanish public was similarly incensed, if a bit more well-behaved; instead of a riot, they settled for a sternly-worded piece in a Spanish paper calling the film “…the most repulsive corruption of our age … the new poison which Judaism, Masonry, and rabid, revolutionary sectarianism want to use in order to corrupt the people”.  In the US, the only place willing to screen the film near the time of its release was the Museum of Modern Art; then the film was quietly shelved for forty years, until a theater in San Francsisco ran it for two weeks in 1979.