I make no bones about the fact that I’m untutored in film history.  That’s why this project is called the “Movie Crash Course” – I’m exposing myself to film history by just watching the films, picking up on things as I go.  I don’t have the benefit of critical film scholarship as such; but am not letting that stop me from the project. I remind myself that none of the films I see were ever strictly and solely for an audience of film scholars anyway; they were all for regular yutzes like me – and if the regular yutzes of 1930 had the right to form an opinion about these films, then so do I.  Most of the time, this gets me over any fleeting moments of “this is weird and I don’t quite get it” that come up.

Soviet films, however, seem to be a particular hurdle for me. I always read about a film after watching it; and with most Soviet films I end up getting a completely different read on the film than the critics do.  And I’m not talking about the quality – I’m talking about what the film is about, even, sometimes.

Like this film.  Ostensibly it was meant to encourage the Ukrainian farmers of the 1930s to give up their prized privately-owned farms and join forces in collective farming communes.  But…that absolutely was not my takeaway from the film I saw. On the contrary – it’s almost as if director Alexander Dovzhenko was trying to silence the Communist Party line.  It’s a silent film, so there are intertitles – except when the Communist Party members are making speeches.  I actually checked my DVD copy against another version of the film I found online to see if I’d gotten a weird cut– but nope, three Communist speeches went un-intertitled in both versions.

This is not to say that Dovzhenko completely ignored the idea of collectivism, however. But in his hands it comes across as more of an informal, “we’re a community and we’re all in this together” kind of thing.  Everything takes place in a farming community in Ukraine; elderly Simon Opanas is on his deathbed at the top of the film, attended by his son and grandson.  The grandson, Basil, uses the moment to convince his father to merge the family farm with the other villagers’ farms to form a big collective. His father finally agrees, and all the other farmers save one join in, starting by pooling their funds to get a tractor for them all to share.

Life goes on, it’s a great harvest, and everyone’s happy; until one night when Basil is heading home after hanging out with his fiancée and someone kills him.  But Basil’s father doesn’t try to pursue the killer; instead, he’s more concerned with the kind of funeral Basil will have.  By now he’s been really won over by his new community, and declares that Basil will not have a traditional religious funeral. Instead, he asks Basil’s friends to come up with their own ceremony, burying Basil in a new way while “singing new songs of new life” instead of the old dour hymns.

If you’ll pardon the pun, the film ends up being more about the “earthy” facets of agricultural life than anything else. The film opens with shots of fields of waving wheat, and it ends with a sequence of a rainshower lovingly bathing orchards of fruit and gardens full of vegetables. The lengthy harvest sequence cuts from shots of the men happily using the new tractor to women busily bundling the wheat into sheaves – and then follows the sheaves into grain threshers, the grain into flour mills, and the flour into commercial bakeries churning out abundant beautiful loaves of bread.

And the film plays up the earthy, elements-of-life moments for the characters as well. Mixed in with the shots of the women threshing grain are shots of their bare legs, and shots of them smiling and flirting with the guys while they work. Basil’s pro-Communist speech at his grandfather’s deathbed isn’t titled – but his grandfather interrupting them to ask for one last slice of pear before dying does get an intertitle.  When the tractor stalls en route to the village, the five men accompanying it discover that the radiator is dry – and solve the problem by peeing into it.  During Basil’s funeral procession, we also see shots of one of the village women giving birth, and shots of Basil’s fiancée alone in her house, insane with grief – she rips off her clothes and trashes her bedroom. But these scenes of new life and serious grief are intercut with Basil on his byre, his friends carrying him past abundant orchards and peaceful fields of sunflowers.

Which actually may be an echo to his grandfather’s death scene – with old Simon lying down peacefully amid a mountain of pears in the orchard. 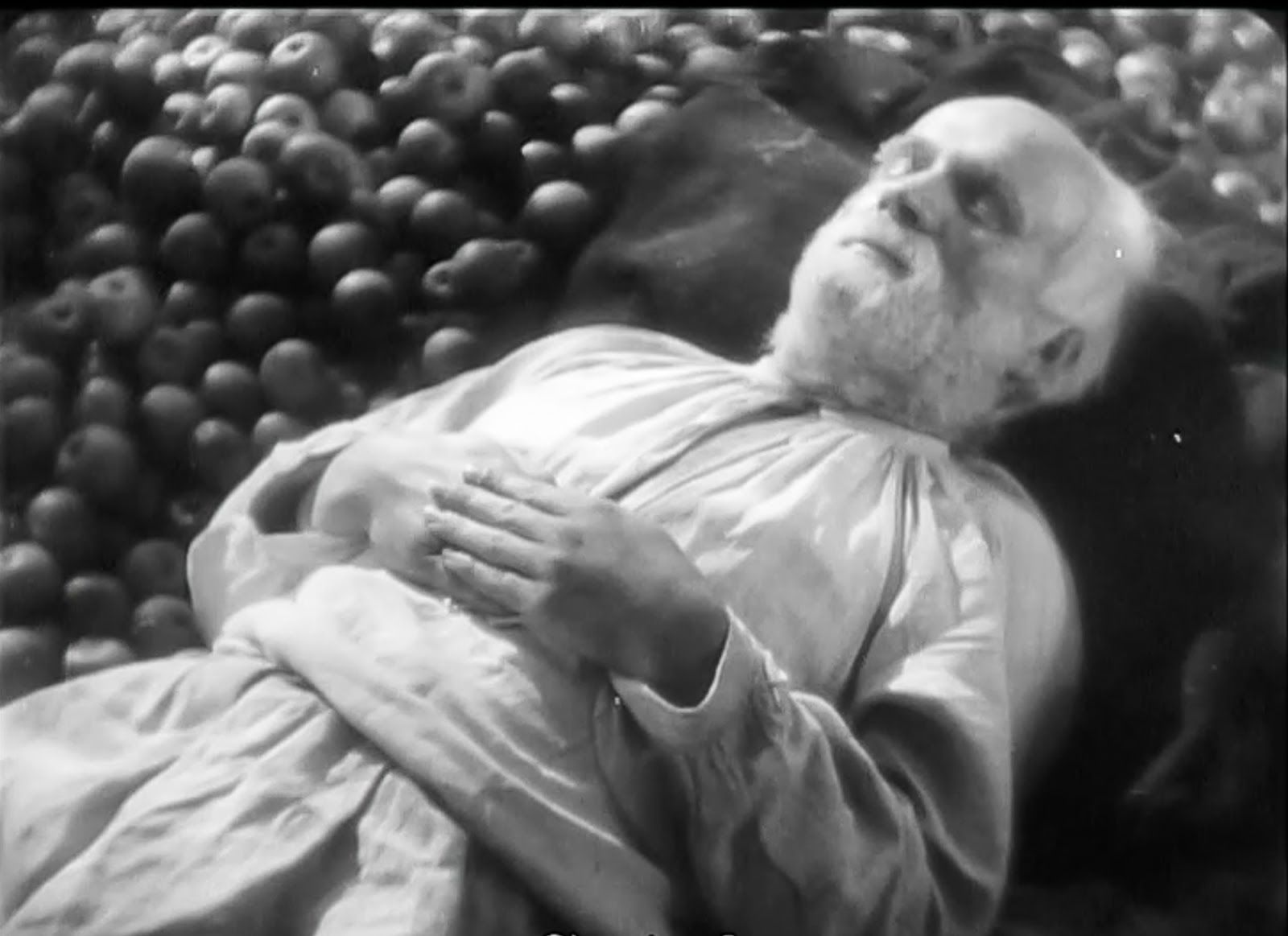 So what this ended up looking more like was a poetic paean to life, death, and the fruits of the earth, and the Soviet Collectivist Message was more like something Dovzhenko tacked on to ensure his film got released.  Whether that was actually the case, I couldn’t say.