Like I said with Nosferatu a while back: it’s a vampire story, you know the drill.

Although in this case there’s a bit more to it.  Nosferatu was originally going to be an adaptation of Bram Stoker’s original work, except that F. W. Murnau didn’t do the due diligence getting the rights, and Stoker’s widow sued.  So Murnau changed the name and some of the details of the story. In this case, producer Carl Laemmie was a bit more careful, and got the rights to the story of Dracula first before proceeding.

Even so, this isn’t a straight adaptation of Stoker’s book; instead, it’s an adaptation of a stage play, which was itself an adaptation of the novel.  This was probably a wise move – the book has a number of extraneous characters that would be getting in the way, while the play pares down the cast list considerably and streamlines the story, to its benefit.  I’ve read the book, and even seen the Francis Ford Coppola adaptation (which is a more faithful by-the-book version), and even with that reinforcement I still don’t remember any of the names of the extra characters; but Van Helsing, Mina, and Dracula, I know solid.  For this reason alone, basing the movie on the play was a wise move.

The film also owes a debt to the stage play in one other respect, however. Originally, despite rave reviews as Dracula during the stage production, Bela Lugosi wasn’t even under consideration for the lead role; Laemmie was considering a number of other actors instead. But while Laemmie was auditioning actors, a touring company of Dracula came through Los Angeles, and Lugosi was conveniently playing the lead here as well.  He all but dragged Laemmie to see the production, and campaigned hard for the role, going so far as to accept a pittance of a salary: only $500 per week for the two months of filming. Even though he came to regret it in later years, Lugosi became so associated with the role that it’s nearly impossible to imagine anyone else playing this cursed count.

Lugosi’s performance wasn’t the biggest revelation for me watching this film, though. Somehow, despite never seeing more than the occasional clip here and there, I found that I’ve managed to build up a version of the film in my head that was wildly different from the actual film. I was expecting a much more violent and frantic Count Dracula, and a wild orchestral score.  But instead – there is very little music, and Lugosi is much more prone to stony stares and languid, hypnotic pacing, and I’m not entirely sure how I got my previous impressions.

Dwight Frye, as Renfield, was another revelation. In the Coppola film, Renfield is played by Tom Waits, so you already expect him to be a little nuts.  But here, Renfield is one of the first characters we meet – a spit-and-polish solicitor who bravely sets off for a meeting with the Count, poo-poohing the warnings from the villagers about Dracula being a vampire as he does.  He still turns into a madman in due course, but the contrast with the earlier sane Renfield is especially striking. 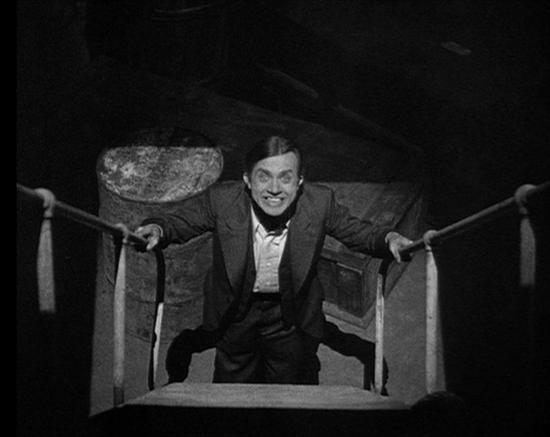 There’s some “special effects” moments that are a little laughable – the film makes frequent use of a bat flying around and menacing characters, and the bat in question is a little too obviously a puppet on a string.  I also raised my eyebrows a bit at an early scene in Dracula’s castle, when Renfield was timidly checking the place out and saw all kinds of creepy animals crawling around, like spiders and rats – and, strangely, he sees a group of armadillos nosing around some stairs.

Nevertheless, this is a film that has worked its way into our collective id, even if – like with me – the impression you have of the film is wrong.  It’s earned its way in there, wobbly bats and Lugosi’s stare and all.