This is a strangely, simply affecting fairy tale of a piece, about an elderly hotel doorman who loses his job.

No, that’s literally the entire plot.  Save for an epilogue which is so tacked-on that even the filmmaker confesses he threw it in at the last minute.

We never learn the name of our hero, a big Santa of a man; we never even hear him “speak”, there are no subtitles or intertitles in this simple film.  But his pride in his work is obvious – as he scurries hither and thither attending to his guests, he finds time to tend to his appearance, smoothing down his mustache and polishing off his uniform.

And he does look quite dapper. His uniform gives him an air of respectability in the little alley where he lives – when he heads home after work, the neighbors all greet him, children stop to watch him pass, ladies beating out their carpets stop so as not to sully his uniform. He is the unofficial mayor of his street.

He lives in a small apartment with a young woman – the film isn’t clear whether she is a daughter or a niece – who is preparing to marry a young man from elsewhere in their building. He takes such pride in his work, though, that he skips her actual wedding, promising that he will be at the reception afterward.

But that day, when he arrives at work, another man is minding the door. He is summoned to the hotel manager’s office and informed that because of his age, he is being demoted – from now on he will serve as the washroom attendant.  It’s clear he sees it as an enormous blow. 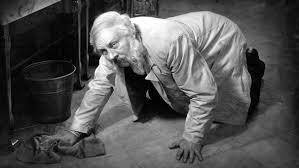 His duties as washroom attendant are demeaning drudgery.  But even worse, he has to give up his magnificent doorman’s uniform – and he is so disturbed at this detail that he breaks back into the hotel after hours and steals it back, donning it to wear to his niece’s wedding reception.

He dons it again before work the next day, secretly changing in a nearby train station and leaving it in one of the station lockers before resuming his real new uniform.  But a neighbor has the idea to bring him some lunch that day and finds him out.  By the time he heads for home – having retrieved the uniform and changed back into it – the news has spread through his alley, and his neighbors are all laughing at him.  His niece is crushed, his niece’s new husband worried that he’s demented. In despair, he flees back to the hotel to return the uniform.  The night watchman catches him in the act, but lets him go out of pity – but he’s still too ashamed to go home, so he beds down in the washroom, the night watchman tenderly covering him with his coat.

We think it’s the end.  But then the movie announces its intent to make an improbable turn into fairy tale, in one of the only intertitles in the entire piece.

And I’m gonna leave that a surprise.

It wasn’t until writing this piece that I made the surprising discovery that this film had the same director as Nosferatu. The tone of each film is enormously different.  Although, in retrospect, both films did rely more on actors’ facial expressions and gestures than on language; the actors in The Last Laugh are fantastically expressive, and I was easily able to follow the action.

I’m not sure how I feel about that epilogue, though.  It is right on the edge of feeling a little too fantastical; but, on the other hand, it’s really cheering to see our lead looking so happy again.