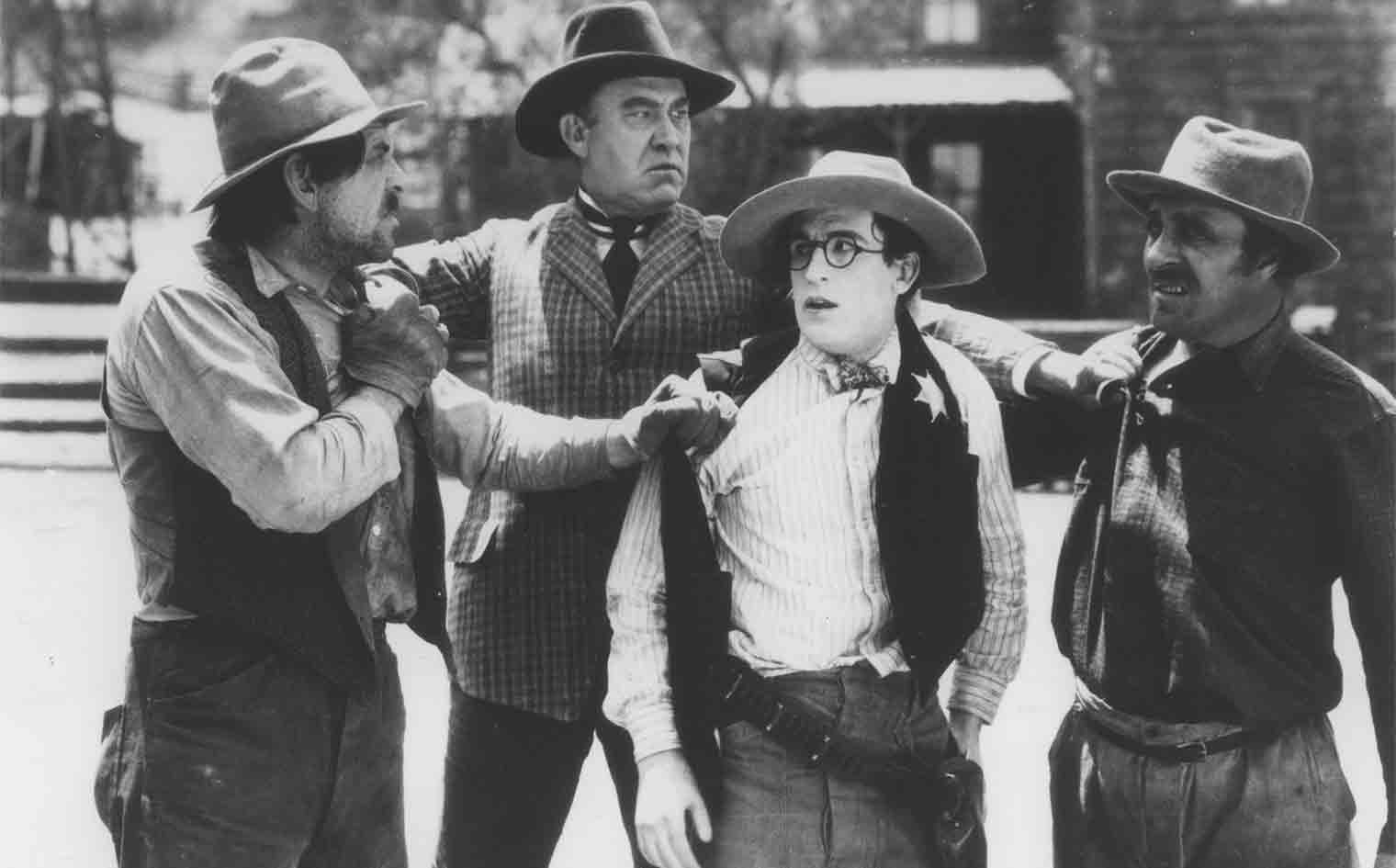 So far we’ve had the Silent Film Comedy Stars version of Coke Vs. Pepsi in here, with me coming down on the side of Team Buster.  The Kid Brother introduces our R.C. Cola – Harold Lloyd.

Lloyd is pretty much doing the same thing Chaplin and Keaton did – setting up a simple scenario and using it as an excuse for a lot of gags.  In Lloyd’s case, rather than being a stoic like Keaton or a cuddly little tramp like Chaplin, Lloyd is more of a Horatio Alger go-getter – optimistic, ambitious, eager to please, ready to try new ideas.  In some respects, his optimism is a bit like Chaplin’s Little Tramp.  But where Chaplin had a sort of sentimental feel to his work, Lloyd’s work has more slapstick and hair-raising stuntiness – kind of like Buster Keaton, upon reflection.

Lloyd’s gags also seemed to spring organically from the plot.  In this Old-West tale, he is the youngest of the sheriff’s three sons – and considerably wimpier than his beefy brothers.  As a result, his father leaves him out of the heavy farmwork and family duties, saving the “women’s work” like laundry and housekeeping to him instead.  Lloyd’s “labor-saving” ideas for the chores are some of the film’s gags – like this hack for washing dishes.

Pa also leaves our hero behind when there’s a big town meeting to discuss building a dam on the creek. Lloyd consoles himself by putting on his father’s sheriff’s badge and playing a little wishful-thinking pretend – and that’s exactly when a traveling medicine show comes by, hoping to get a permit to set up in town for the night. Lloyd tries to tell them he’s not the sheriff – but the dancing girl catches his eye, and he forges his father’s name on the permit.

Of course his Pa finds out, and sends him to stop the show (“since you want to play sheriff so badly…”)  It…doesn’t exactly go to plan, and the show’s tent burns down.  But the dancing girl, who’s taken a shine to him too, is still in his corner.  And when calamity strikes Lloyd’s family, she encourages him to save the day.

I tried really hard to avoid mental comparisons to Keaton or Chaplin while watching this.   So many of Lloyd’s stunts seemed Keaton-esque, though, that I couldn’t avoid it. However, much of Keaton’s gags involved him trying to get out of trouble.  Lloyd has some of these as well, but also has a number of gags about clever solutions to problems – the dishes above, for one, or “disguising” himself as a woman by slipping a couple of curtain rings on his wrist.  In a scene on a wrecked pirate ship, he covers his tracks by putting his shoes on a monkey and setting it loose to create footsteps leading the opposite direction.

(For the record – you read that right, this is a film set in the Old West that also has a wrecked pirate ship and a monkey in it.  I have so many questions about that, you guys.)

Ultimately, which of the three was “better” is kind of beside the point.  They’re all good.  So I suppose it all comes down to what flavor of comedy you are looking for – the classic-Coke subtle sharpness of Buster Keaton, the Pepsi-charmingness of Charlie Chaplin, or the RC-Cola brash cleverness of Harold Lloyd.