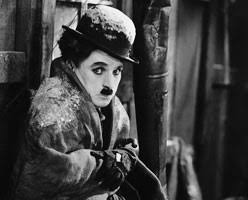 Charlie Chaplin’s The Gold Rush is another film I’m not going to describe the action for.  However, in this case it’s because whether you know it or not, you’ve already seen a lot of this film.

The plot is a comparatively gentle adventure story, with Chaplin as a novice prospector (and one woefully underdressed for Alaska’s winter).  He bumbles his way through the tundra, gets caught in a storm and takes shelter in a cabin with a pair of other prospectors.  One ventures out to find food, but discovers a claim and camps out there; driving Chaplin and the other prospector to distraction with their hunger.

After the storm our little Prospector drifts into a frontier town, where he quickly falls in love with Georgia, a dance hall girl there, spending most of the second act trying to woo her. She writes him off in favor of Jack, a flashier guy in town. But gradually, his gentlemanly ways start to win her over; although what ultimately helps is money our hero finally gets after many varied hijinks.

And the hijinks are what you’re going to remember.  For it seems that what Chaplin was best known for, is the schtick.  In fact, if you were to make a list of Chaplin’s best-known “bits”, most of them are actually in this one film.

Cooking a boot?  It’s in here.

Trying to stay upright in a tilting house?  It’s in here.

A hungry companion hallucinating that he’s a chicken? It’s in here.

…This project has been my first real encounter with both Charlie Chaplin and Buster Keaton, even though I’ve been hearing about them both all my life. I also kind of got the sense that there was a sort of rivalry between them; just like how you’re either a Star Wars person or a Star Trek person, or you’re either a fan of the Beatles or the Rolling Stones.  Or you’re Team Edward or Team Jacob.

Similarly, you were either a Charlie Chaplin person, or you were a Buster Keaton person.  And having finally watched them both, I think I’m Team Keaton.  I appreciated Chaplin’s schtick, and it was fun to watch, but his comedy seems more…sweet, rather than zany.  There’s a layer of sentiment that kept me from losing myself in a full-out belly laugh the way Keaton did.

That said, though, there was a bit midway through the film that I actually watched twice simply for the picture it made.  It’s a scene when Chaplin first comes upon the dance hall; a song strikes up and everyone else in the room starts dancing, but Chaplin is left alone.  And for several seconds he is simply standing in the foreground, watching the dancers all alone, his back to us.

I couldn’t tell you why, but I found this moment strikingly and hauntingly beautiful.