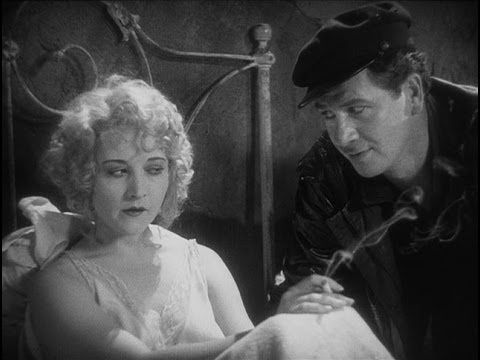 I’ve not previously run into a film that felt this much like a Tom Waits song.

It’s called The Docks of New York, but the film is mostly set in one bar where two steamship stokers and their boss are spending their one night of shore leave.  I’m assuming simple chance (or plot convenience) has brought them all to the same place – which just so happens to be where the foreman, Andy, runs into his ex-wife Lu carousing with some of the sailors from another ship. They have a grumpy, but resigned, reunion.

Stoker Bill, meanwhile, is en route to the same bar when he sees a woman jump into the harbor in an attempt to drown herself. He jumps in to rescue her, and brings her to the bar – conveniently close by – for help. The barmaid hustles her to one of the rooms upstairs, Lu tagging along to play nursemaid.  But Bill is taken with the young lady (or at least her looks) and lingers in her room, wanting to help as well.

Our damsel in distress is Mae, a down-on-her-luck prostitute and barfly. She insists Bill should have let her drown, but he’s persuasive enough to let him show her a night on the town. “I can always make a hole in the water tomorrow night,” she says, shrugging.

Bill proceeds to wine and dine her – at least as far as one can in a dive bar – while also trying to talk her out of suicide.  She thinks she’s run-down? Well, he is too.  She’s done bad things?  Well, so has he. She thinks she’s ugly? Hell, no, she isn’t. Bill is so caught up in his mission – or captivated by Mae – that when she sighs that no one would love her for keeps, Bill blurts out that he’ll marry her, right then and there. Why not? When Mae scoffs, Bill doubles down – and gradually enlists the rest of the bar in the game. Someone drags the local preacher in to officiate, and the deed is done.

….And then the next morning, Bill gets cold feet. Mae wakes up as he prepares to do the walk of shame back to his boat, and he stammers out excuses – come on, she knew it was a game, wasn’t it?  Mae sheds a few tears, but lets him go, resigned to her fate.  Bill’s conscience bothers him all the way back to the ship. But meanwhile, Andy – who’s stayed behind, and also was checking Mae out – thinks he can step up now.  However, Lu has her own opinions about that…

The relationship between Lu and Mae, actually, is a lovely touch. The other characters and their stories all seem like stories I’ve heard before – the down-and-outs who find each other, the hooker with a  heart of gold, the rough-and-tumble sailor who finds love – but Lu’s story really caught my eye. She treats Bill and Mae’s “wedding” as a game at first, but like Bill, she’s been touched by Mae’s plight – and gradually comes to see her with genuine sisterly affection. 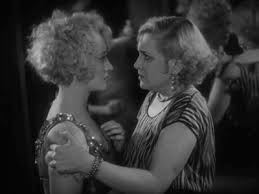 Reviews at the time seem to all have agreed: the performances were good, but ultimately it was a run-of-the-mill story with a far-fetched ending. Still, there are some nicely set-up shots that herald the days of film noir; Mae’s suicide attempt caught my eye particularly.  All you see at first is the water, then her reflection in it, then you see the reflection jumping.

The “life among the low-lifes” element is also safely titillating, but ultimately nothing earth-shattering.

Tom Waits would really have fun producing a remake of this, however.  Maybe he’d even take a cameo as the preacher.