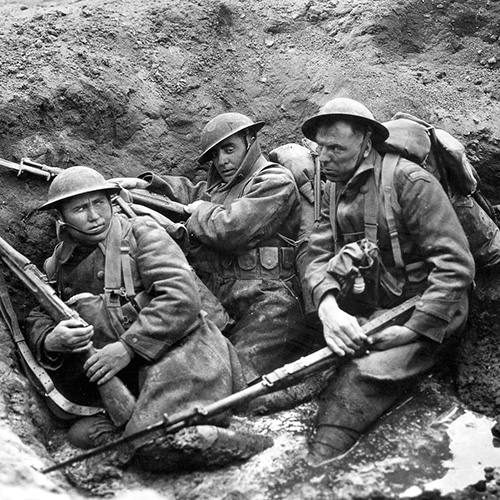 I feel like this is the Ur-War Movie.  Released seven years after Armistice in France after World War I, The Big Parade is noted for being the first film to depict the First World War from the average GI’s perspective; but it also reminded me of all of the tropes from “war movies” that by now feel so familiar.

Each half of the movie has a very different tone as well, with all of the comedy happening in the first bit.  Our hero is Jimmy, a young man of wealth who has little ambition for work. But when war is declared, his sweetheart gushes about how handsome he’d look in uniform, and he enlists. Soon he is in France, rubbing shoulders with lower-class men and coping with Army life – mess halls, washing clothes in a stream, shoveling manure in a barn. At least he’s making friends with a couple of fellow soldiers, and romancing the pretty daughter at the farm where his squad has been stationed. While he’s wooing the natives, his buddies are getting into their own hijinks – rigging up showers out of barrels and colanders, raiding local wine cellars, and such.

Then about midway through, Jimmy’s squad is sent to the front lines, and the tone of the film dramatically shifts, with the zany army hijinks giving way to daring army bravery.  Our three heroes cover each other during gunfire, march into battle, and huddle in foxholes, sharing a dwindling supply of cigarettes and chewing tobacco.

There are noble sacrifices, tragic deaths, last-ditch rescue efforts – and the realization that the rag-tag misfits have become brothers of a sort.  There’s even the tragic love story, with Jimmy realizing he has to choose between his girl back home in the States and the spunky French girl he has fallen for.

…I feel like I’ve seen elements of this film in everything from Stripes to Full Metal Jacket to Heartbreak Ridge. Unfortunately, for most of the war half that worked to the film’s detriment with me; I’ve seen bits of plenty of John Wayne films, and all the accompanying moments of heroic noble wartime sacrifice, so the second half mostly felt formulaic.  The romance between Jimmy and the French girl Melisande seems pretty forced as well – one minute she’s punching him for getting a little too handsy during a walk, but the next minute she’s kissing him.  ….I dunno. 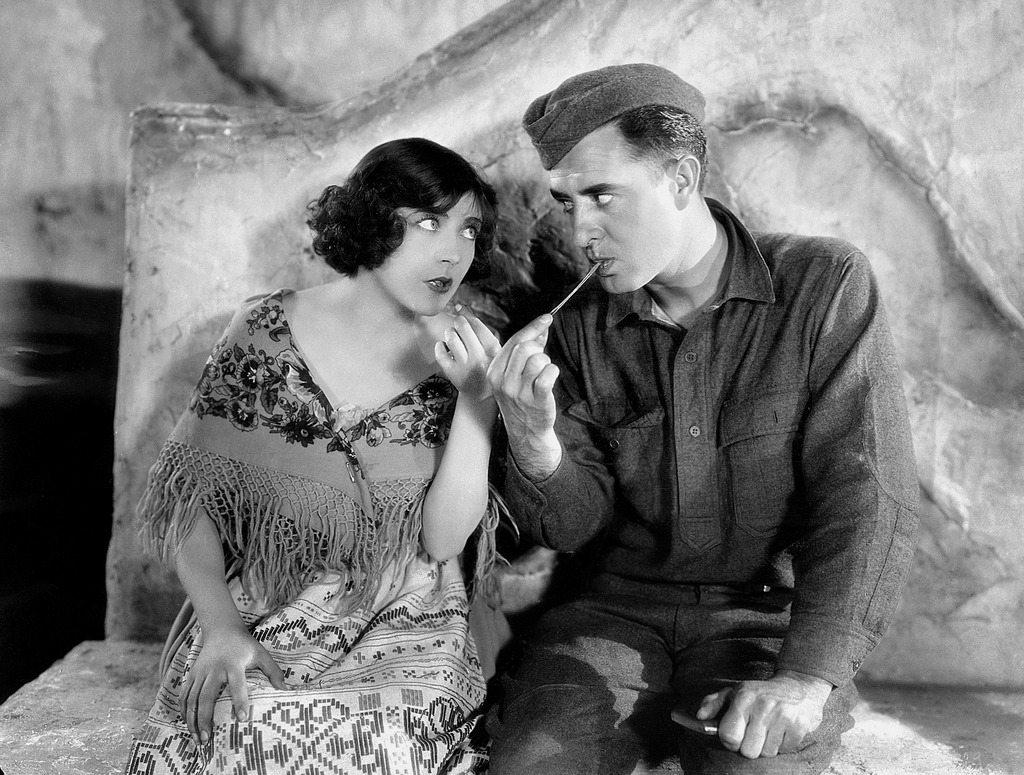 That said – there are still some charming and arresting moments. Jimmy quickly learns that his own French is abysmal, and so is Melisande’s English, which presents a challenge. So during one of their “dates”, he settles for a wordless bonding activity – introducing her to bubble gum.

Even earlier, before they even meet, Jimmy snares a barrel to hack into a shower, and can only think to carry it home by putting it over his head and trying to peer through the bunghole. He runs into Melisande on the way – literally – and she clowns around with him a bit. 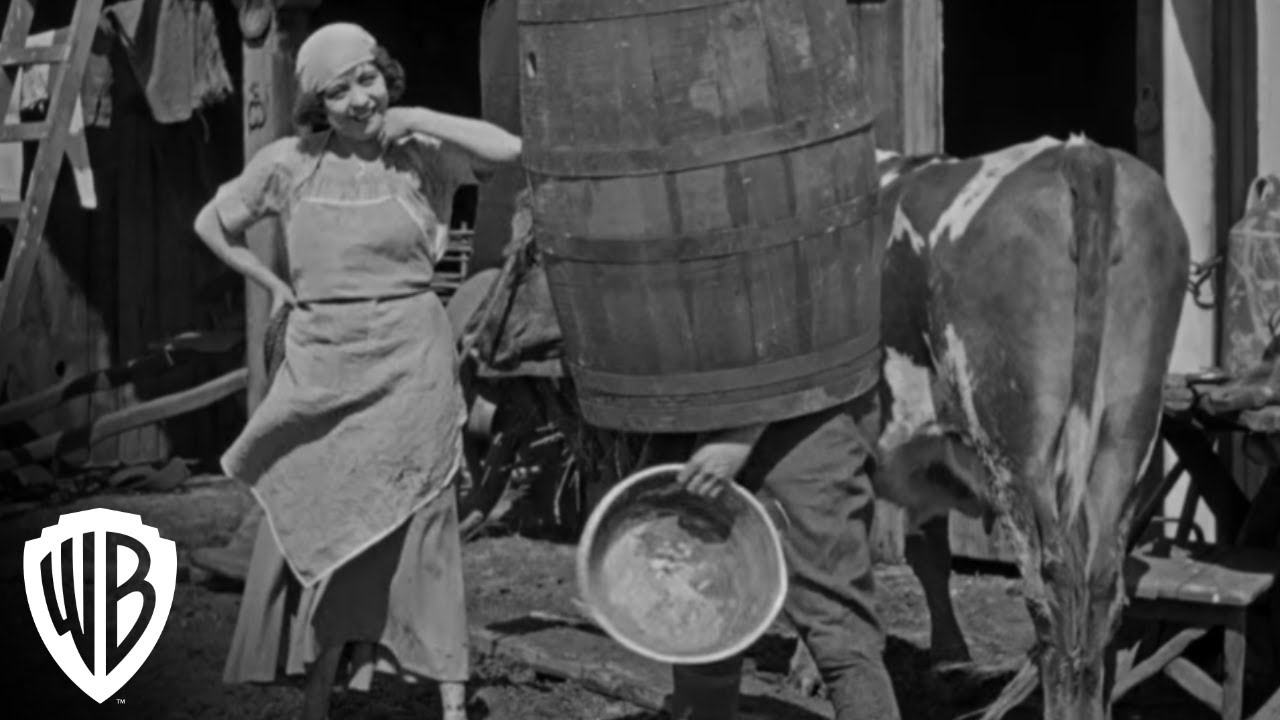 And there are serious moments too. A later scene sees Jimmy in a wartime hospital – and as he surveys the room from his bed, alongside the other soldiers with bandaged legs and arms and heads, there is one man he sees, flailing desperately, who has been tied down to the bed. It’s a moment that may have softened the actual effects of shell-shock, but that the film acknowledged it at all was a surprise.

On the battlefield, too, was a scene that was indescribably eerie. Jimmy’s squad has been sent into a forest filled with snipers, in an effort to flush them out.  The squad spreads out, with Jimmy and his two buddies alongside each other – and as they march, guns at the ready and looking about nervously, every few seconds someone from the row behind them just falls over, a victim of the sniper. There’s no comment on it, Jimmy and his crew flinch briefly, but that’s it. It’s really eerie. 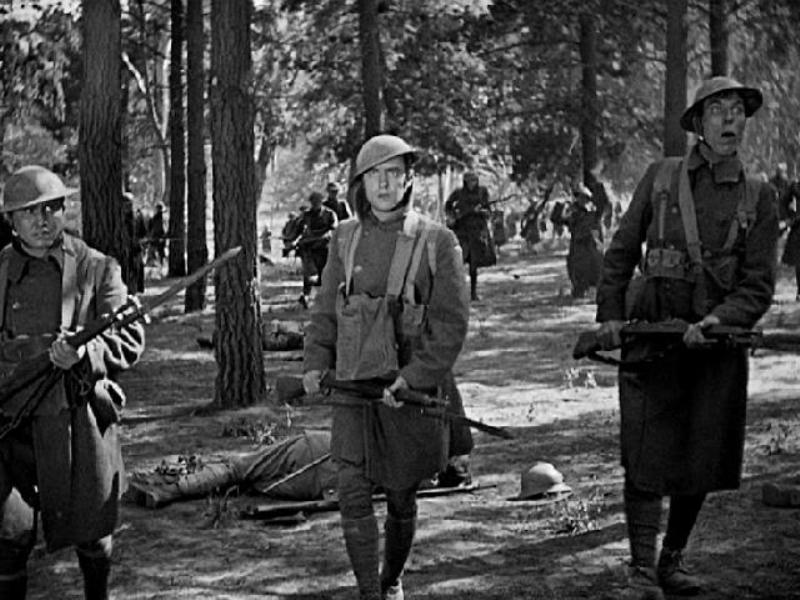 The Big Parade won big at the box office, with audiences flocking to see a dramatization of what they’d just lived through just a few years prior. The unflinching look at war’s impact also caught the eye of producers of the later movie All Quiet On The Western Front, who reportedly were inspired by the film.