So. You know how romantic comedies have a “montage”?  You know, a brief series of clips set to sprightly music, with the carefree couple out on the town doing all sorts of fun things like sharing ice cream sundaes, flying kites, strolling hand-in-hand on beaches, riding the Tilt-a-Whirl at amusement parks…  Usually these only last a couple minutes.  But if you took one of those sequences and expanded it a full hour, you would get Sunrise. It’s corny as hell – but in a way that sneaks up on you. 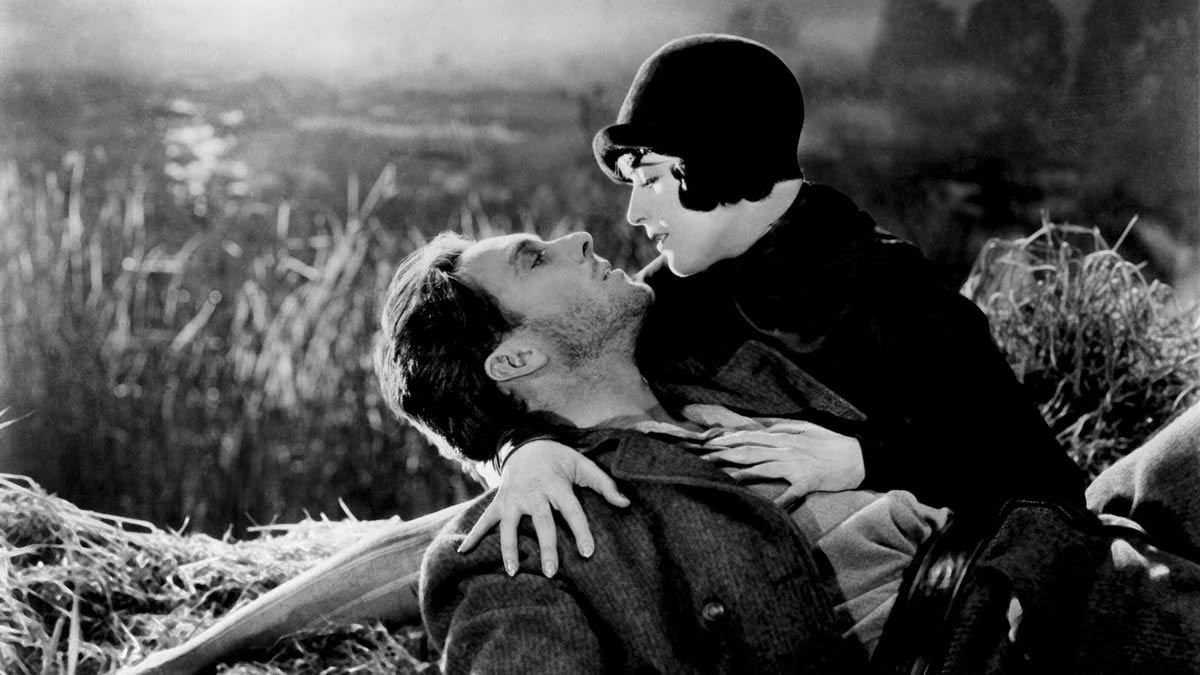 It actually starts quite grimly, with a love triangle between our three unnamed characters: The Man, a farmer in a small lakeside town, his sweetly angelic Wife, and “The Woman From The City,” a vamp who initially came for a vacation during the summer but has extended her stay for several weeks, conducting an affair with The Man.  By the start of our plot, she’s been in town for over a month, and The Man’s affair is now an open secret – he’s sold off some of his animals and is constantly sneaking out of the house for trysts with the Woman, leaving his Wife alone to sadly tuck their child into bed and eat dinner alone.

Early on, during one of her trysts with The Man, the Woman From The City pleads with him to sell the farm and join her back in the city.  He points out that he’s married, duh.  “Well – “ says the Woman – “what if she….drowned?”  The Man is horrified, but The Woman has thought out the entire plot – a staged drowning accident after a day out on their rowboat.  Her seemingly foolproof planning, plus some well-timed canoodling, convinces The Man to go for it.  But – when they set out on the fatal voyage, at the moment that The Man gets up to do in His Wife….he can’t go through with it, and takes her on a day trip to the City instead. 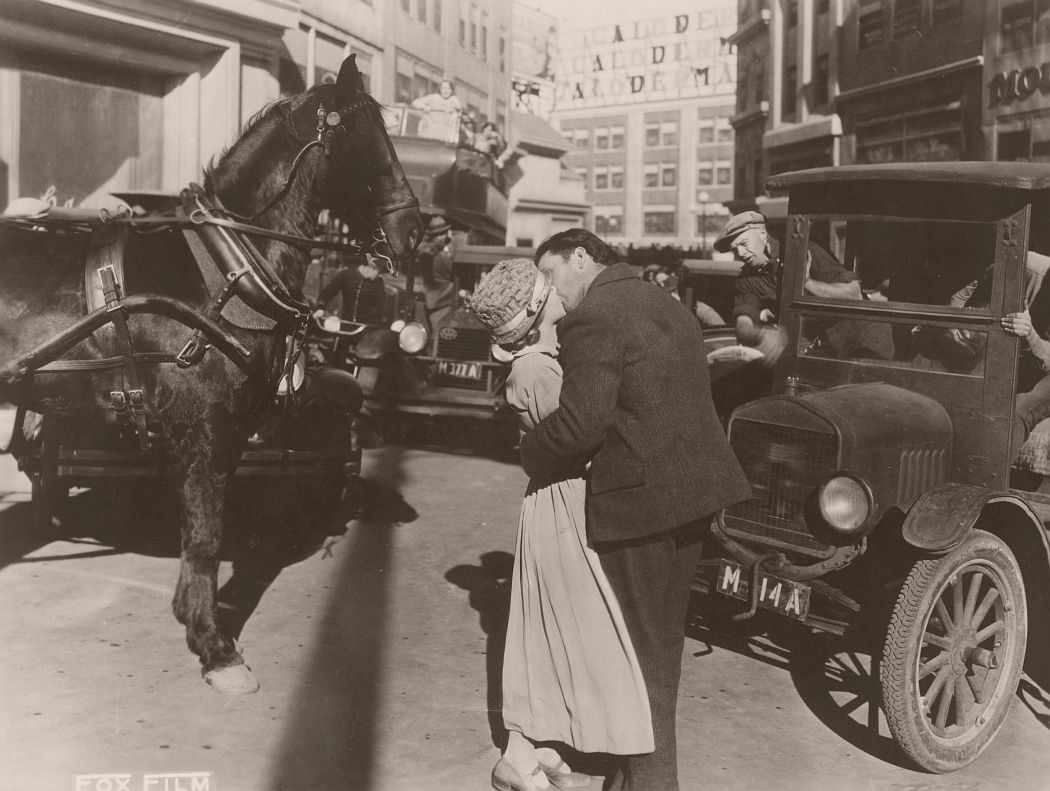 Save for a couple of Significant Moments, I found myself spending much of the montage wondering why we were watching it.  It was cute and entertaining enough; there are a couple of sweet comedic sequences, one set at a photographer’s studio, another at a barber shop.  There’s also an extended sequence at a combination amusement park/dance hall, where The Man plays an utterly baffling version of Skee-ball that somehow involves trained pigs.  Followed by a merry chase scene when one pig gets loose.

I mean, it’s all cute.  But in the moment it seems oddly pointless.  I’m also not crazy about romantic comedies anyway, so I spent most of this montage feeling faintly amused, yet bored.  You will note, however, that I said it seems pointless – because what I learned is the film is lulling you into a sense of security, which it then blows up with a plot twist during the last 20 minutes of the film, as the couple is heading home.  I will not reveal it, of course – but I will reveal that I went from slouching on the couch feeling faintly disinterested to sitting up, riveted, and even muttering “oh no” out loud at one point.

The standout in the cast is The Wife, played by Janet Gaynor.  The film calls for some emotional whiplash from her; she switches from long-suffering betrayed wife, to unease at her husband’s behavior in the boat, to gaiety in the City, all within just a half hour. It could have been histrionic, but she pulls it all off in a genuine way that no doubt contributed to my being suckered in by the montage.   The performance earned Janet Gaynor the first-ever Best Actress award at the first-ever Oscar ceremony in 1927.  The film won two other Oscars – one for cinematography, and one for “Best Unique Or Artistic Picture”, an award that was only ever presented at the first ceremony and was later scrapped in favor of the overall “Best Picture” award. 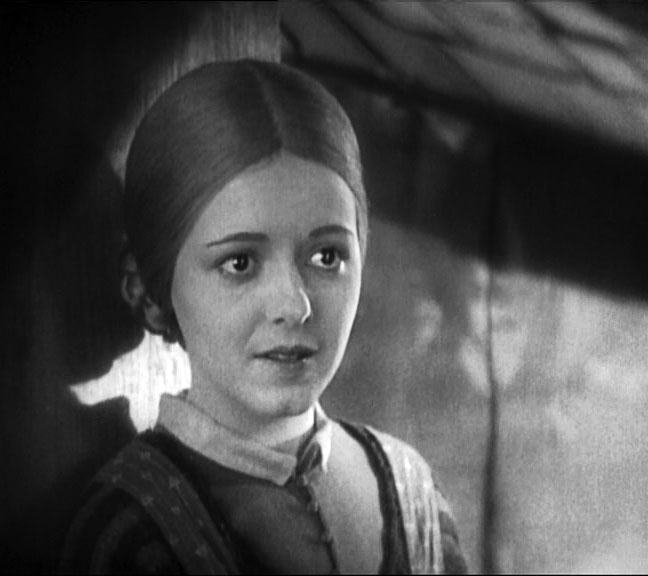 The cinematography drew notice through its use of extended tracking shots, with the camera following the actors as they walked down a street or through a marsh.  It isn’t the kind of thing you’d notice today, in the days of Steadi-cams and Spike Lee “dolly shots”, but in 1927 it was groundbreaking.  There is an extended sequence where the camera follows The Man as he picks his way through a swamp in his way to a tryst with the City Woman; the only way they could get the shot, though, was by building a swamp inside a soundstage and leaving a clear enough path for the cameraman to wheel his rig along, following The Man through the “trees” and “brush”.  Again, this seems a common thing today, but worked to great effect.

Notably, the film has another “first” to its credit. Most people think of The Jazz Singer as “the first film with sound,” but it’s actually Sunrise; it was the first to use the then-experimental Movietone Sound System, which recorded the sound directly onto the film.  However, director F. W. Murnau only used the technology for a small handful of sound effects, and stuck to intertitles for the actors’ speech.  So more accurately, The Jazz Singer is still the first film to use sound technology for actor dialogue specifically, but Sunrise was the first release to use sound overall.

…Speaking of The Jazz Singer, that’s coming up soon….