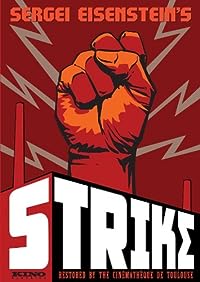 Strike was released in 1925, and was the first film by director Sergei Eisenstein.  His better-known Battleship Potemkin was released that same year and quickly overshadowed this one in terms of notoriety; I was aware of Potemkin even as a child, well before starting this project.

In terms of plot, it’s a bit thin on the ground – a strike at a small Russian factory in 1903, which ultimately fails.  Eisenstein had planned it to be part of a series ending with the ultimate victory of the Proletariat; however, this was the only one of his planned seven-film series that got made.  Still, the thin plot is made up for with some striking visuals, starting in the very first scene as the factory’s workers are whispering amongst themselves about their dissatisfaction.

The owner of the factory, meanwhile – who is depicted as a fat buffoon – suspects that discord is afoot.  He enlists a series of spies to circulate amongst his workers and figure out what’s going on.  Eisenstein takes a break to introduce us to four of these spies, each of whom is named after a given animal, like “Monkey” or “Owl”.

However, after that build-up, the factory workers seem to be pretty good about avoiding them, and they are pretty quickly forgotten.

The strike is triggered when one of the workers steals another’s tool; the victim reports the theft to the manager, and is bizarrely accused of committing the crime himself and ordered to pay for it.  Instead he hangs himself, leaving his comrades a note decrying the manager. His comrades are angry enough to stop work then and there, and storm off the factory floor, spreading to the various departments of the firm and rallying the others before finally storming to the foreman’s office and loading him onto a cart and dumping him in the river.  They then head home, leaving the machines of the factory silent. Things seem optimistic in the early days of the strike, with Eisenstein treating us to lots of idyllic vignettes as the workers enjoy their break. Fathers play with their kids. Families picnic by lakes. Everyone generally seems to be having a blast.  Meanwhile, in the factory, pigeons roost on the abandoned machines and the factory owner frets as undeliverable orders keep piling up.  He’s already sent in some toughs to threaten the strikers by the time he receives their written list of demands, which he brings to the next factory shareholders’ meeting to discuss a plan of attack.

As the strike approaches a stalemate, the workers’ idylls are broken up with tension and squabbling.  A man ransacks his house for things to sell so the family can buy food. Children cry over their hunger.  And the shareholders continue to increase the tension, up to the very end, when they send in a mounted police force to break the strike.  Shots of the mounted soldiers chasing the fleeing strikers and firing at them are intercut with some actual footage – which is frankly gory – of a cow being slaughtered.  After both bloodbaths, the film pretty much ends there.

The film wears its propaganda on its sleeve, seriously. The factory owners and managers are all depicted as selfish and cruel – one of them drops a lemon wedge on his foot as the team are reading over the workers’ demands, and he grabs the paper on which they’re written to wipe up the spill.  Eisenstein includes a pointed juxtaposition of clips a moment later, when one shareholder is showing off a new juicer to produce fresh-squeezed lime for their gin and tonics; “you just put the fruit here,” he says, showing off the contraption, “and you squeeze it to get juice!” And the subsequent clips of him letting his colleagues try it, urging them to “Squeeeeeeeeze!” are intercut with clips of the workers being threatened by some police toughs.

Subtle this ain’t.  And I really should warn anyone who may be wanting to watch along at home that the footage of the cow’s slaughter towards the end is really graphic. But – it absolutely gets Eisenstein’s point across.