Hooray it’s another Buster Keaton film!  I clapped a little to myself as I put this in my DVD.

It’s not perfect, unfortunately.  The plot for Sherlock Jr. is actually a little thin; Keaton is a lowly movie theater owner who secretly fantasizes about being a star detective, and who is competing with the local playa for the hand of a lovely young thing in town.

One night, when both he and his rival are at the young lady’s house and her father’s pocketwatch goes missing, Keaton heroically offers to investigate. But his rival – who’s secretly stolen the watch and pawned it – plants the pawn shop ticket on him, and he is thrown out in disgrace.   He investigates the case a bit more, runs into trouble, and gives up, returning to the theater. But his sweetheart ultimately solves the case by just asking the pawnshop owner who sold him the watch. He quickly fingers the proper culprit, and she joyfully rushes to the theater to tell Keaton his name’s been cleared; he happily gives her the engagement ring he was going to give her earlier. The end. 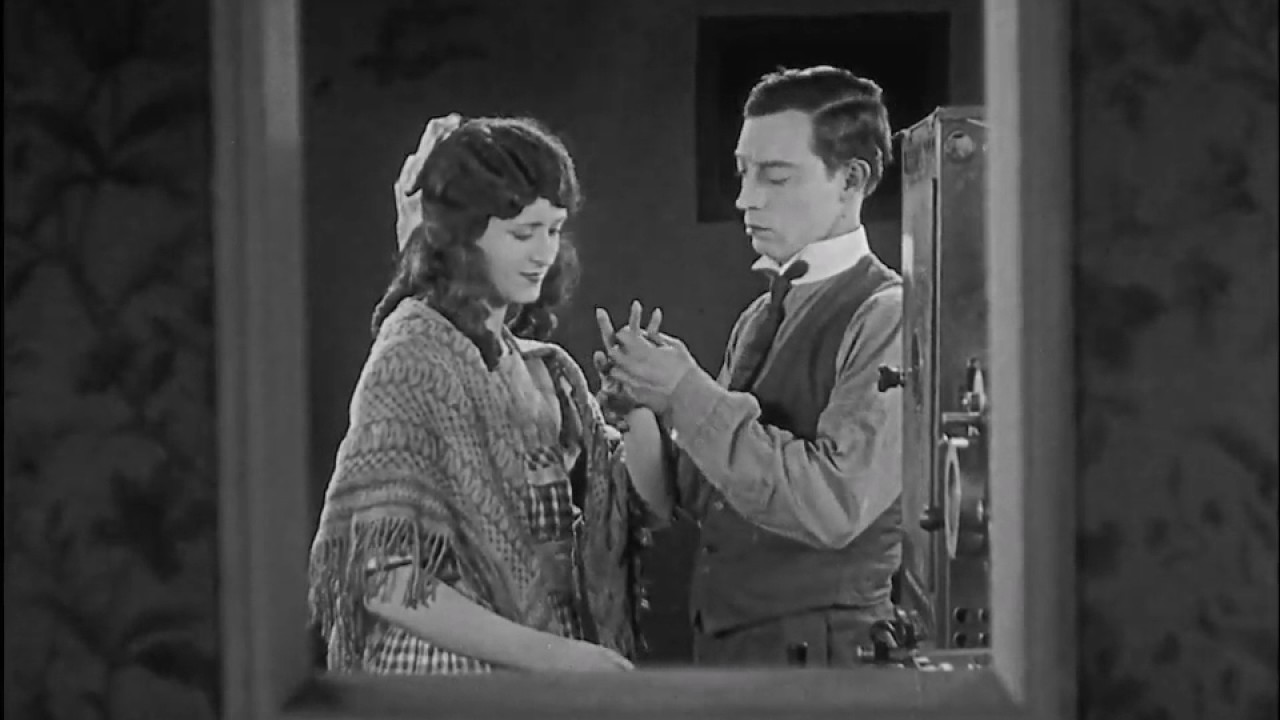 I know I’ve given away the ending.  But the movie was more of a sketch showpiece, created as a home for a series of visual gag sequences Keaton had thought up.  Most come during an extended “dream sequence” after his character dozes off in the projection booth.  The film he’s screening echoes the theft plot from his own life, and he dreams himself and his ladylove into the characters onscreen, expertly solving the case while adroitly escaping from the film-in-a-film’s bad guys.

But all that comes after the opening of the dream sequence – a plotless, but astounding, five-minute extended gag which was the very first thing Keaton thought of filming.  In the sequence, his character walks up to the screen in the theater, and then “into” the film onscreen – and is then stuck reacting to the environment changing around him as the shots themselves change.  One minute he finds himself at a pool, and happily goes to dive in – but the scene changes to a snowy meadow when he’s mid-air, and he lands headfirst in a snowbank.  He extracts himself, and goes to sit on a tree stump – which then vanishes as the scene changes to a formal garden, and he lands on his tuchas on the ground.  He stands up, brushes off, and starts to stalk off angrily – right into a column as the scene changes yet again.

My words don’t do it justice – it’s best if you just have a look.

The more I think of this sequence, and the tools Keaton had available to him, the more impressed I am. Keaton didn’t have CGI available to him – he had to measure the landscape precisely at each different location, plotting out exactly where he had to be standing in each new location to preserve the continuity. Apparently during filming, he enlisted a couple of surveyors to help him keep all the in-space correct; and the editing of that sequence more than doubled his usual production turnaround time.

Another stunt he does later in the film-in-a-film sequence raised even more eyebrows – Keaton’s detective character is trying to escape a couple goons, and gets trapped in an alleyway.  An accomplice comes to help him, inexplicably dressed in a long robe and carrying a briefcase.  He positions himself against the wall and opens the briefcase in front of his chest – and Keaton dives into it, vanishing.

For decades people would ask Keaton about that stunt, but all he would say is that he adapted it from an old vaudeville trick.  He did admit that it took a long time to set the shot up right; but happily reported that between that and the shifting-set sequence, “every cameraman in the business went to see that picture more than once trying to figure out how the hell we did some of that.”

Keaton always did his own stunts – and in this film he came very close to danger. There’s an early sequence just after he’s been tossed out of his girl’s house, when he tries tailing his rival.  But his rival is able to shake him by trapping him in one of a train’s box cars. Keaton’s character escapes by climbing out the skylight of the car, and then runs along the roofs of the moving train cars before finally jumping to grab hold of a passing water spout in the railyard, riding it down as it lowers to the ground before unceremoniously dousing him with water.

During one take, the water came out more forcefully than he expected and Keaton was slammed down against the tracks, his neck striking one of the rails.  Filming ceased that day, but Keaton returned to work the next day, and kept filming as scheduled even though he was suffering from monstrous headaches for the next few weeks.  Nine years later, a doctor pointed out during a routine physical that he had some unusual bone growth on that spot in his neck – and Keaton realized that he had actually broken his neck during the stunt and never realized it.