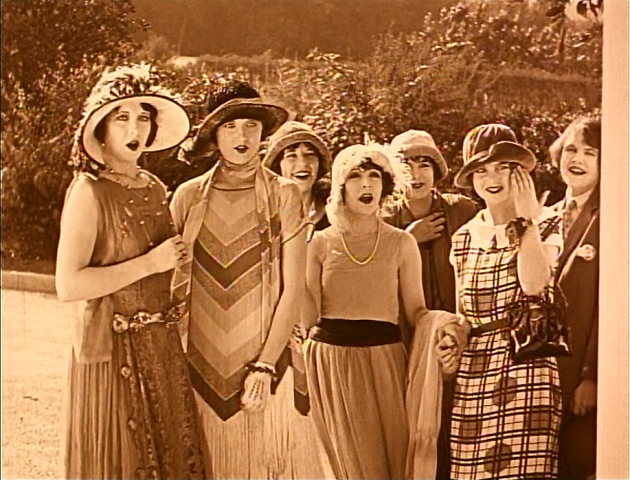 Another Buster Keaton film I eagerly put on.  Here, Keaton plays junior broker Jimmy Shannon – a partner in a brokerage firm that’s about to go bankrupt.  But – what luck! – a lawyer arrives with the news that an aging relative has just died and left Jimmy several million dollars in his will, on one condition: he must be married by 7 pm on the evening of his 27th birthday.  And it just so happens that Jimmy’s 27th birthday is that same day.  Fortunately, he’s been summoning the courage to pop the question to his sweetheart Mary anyway, and he rushes over to propose to her.  But when she finds out the mercenary motivation, an offended Mary dumps him.

Jimmy is left reeling, but his partner Billy Meekin is by now rallied to the cause, going to greater and greater lengths to get his partner hitched – first dragging him off to their country club to try his luck with the seven ladies visiting that afternoon, and ultimately placing a “Calling All Brides!” ad in the paper.  But meanwhile, a repentant Mary sends a message to Jimmy giving him another chance and asking him to show up at her house that evening, preacher in tow.  Will Jimmy get that message in time? Will he end up with one of the seven women at the club?  Or, perhaps, with one of the 100-plus women at the church?….

Actually, the bulk of the film doesn’t deal with any of that – it’s an extended chase scene, with Keaton going to greater and greater lengths to escape a stampede of angry women in white dresses, tangling along the way with turtles, bees, streetcars, boats, cranes, canyons, bricks, and such, in a scene that comes across like a merry fever-dream combination of the Pamplona bulls, the boulder scene from Raiders of the Lost Ark, and a sale at a David’s Bridal outlet. 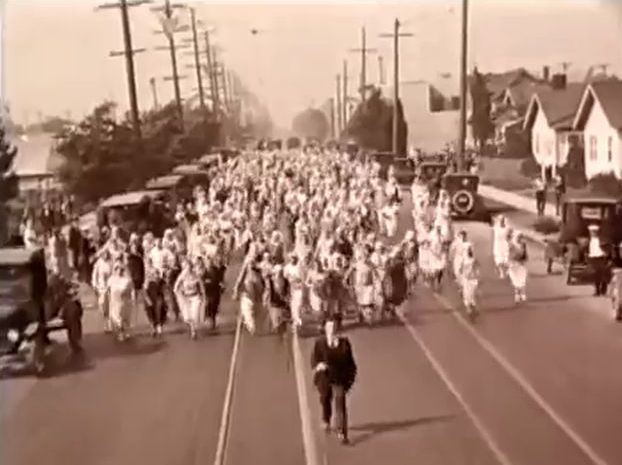 Keaton actually didn’t want to make the film at first. It was based on a stage play from 1916, and one of Keaton’s frequent producers, Joseph Schenck, was convinced it would make a good film adaptation. Keaton hadn’t liked the play, though, and kept putting him off – until he got into debt with Schenck and agreed to the film to help settle the debt.  He even tried to convince Schenck to change the ending, suggesting they fade out in the middle of the chase scene.  (Schenck said no.)

The one thing that finally cheered Keaton up was when an audience at a test screening unexpectedly burst out laughing when Keaton’s character, fleeing down the side of a mountain, dislodged a couple of rocks and then had to dodge them as they rolled after him.  It had been a happy accident at the time of filming – but Keaton had to admit it was funny.  So he expanded the sequence with several more minutes of himself fleeing from ever-bigger rocks (fake ones, of course) cut into the action.  Keaton still wasn’t crazy about the film, but the rock sequence, he liked. 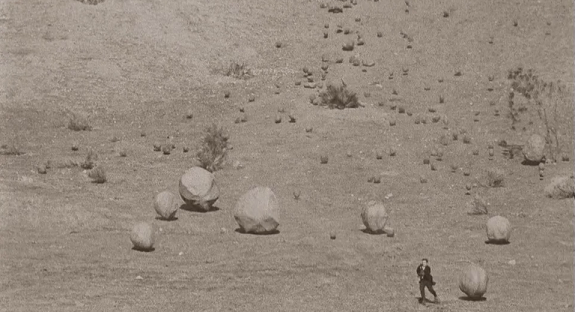 Keaton does find space for other bits of schtick throughout the paper-thin plot – from the exact nature of his proposals to the various women at the country club, to a war of wills with a hat-check girl.

Disappointingly, some of the gags come at the expense of the women themselves – there are a few instances where Keaton recoils in horror from a woman who is either too old or too fat, and in one uneasy moment, he is on a street and about to tap the shoulder of a passing woman and make his offer, but at the last minute he sees that she is African-American and he flees in panic.  That kind of thing was par for the course in 1926, unfortunately.

Surprisingly, I also learned that this film has had a modern remake – Seven Chances was actually the basis for 1999’s The Bachelor, with Chris O’Donnell and Renee Zellweger.  From the looks of the trailer, they kept things like the basic plot and the bride chase, but forgot to put in Keaton’s charisma.