My word this was fun.

Set in the early 1800s, Our Hospitality is an early Buster Keaton film, taking the story of the Hatfields and McCoys and playing it for laughs.  Keaton plays “Willie McKay,” the only surviving son left in the McKay family.  When he was just a tot, his father died in a mutually-fatal shootout with one of the patriarchs of the Canfield family; his mother fled with him to her sisters’ place in New York City, hoping to save him from meeting the same fate at the hands of the surviving Canfields.  But twenty years later, an estate lawyer tracks him down and informs him he is the sole heir to his father’s estate, urging him to take ownership.

He excitedly runs home to pack, but his aunt warns him of the feud. No matter – he’s determined to go, picturing a grand mansion waiting for him to move in. On the train to the mansion, Willie gets quite cozy with Virginia, a young lady headed to the same Blue Ridge Mountains town as he is.  It’s something of a bumpy ride, and they’ve bonded by the time they arrive in town.

But in the rush of arrival, they lose each other in the crowd; Virginia is too excited to see her family again anyway. And who’d have thought – her family name is “Canfield”.  Papa Canfield, along with one of her brothers, whisks her home, while the second brother lingers in town long enough for Willie to ask him directions to the McKay estate.  Brother Canfield offers to show him the way, seeing the perfect chance for a revenge killing of Willie – except, he’s unarmed.  He stops them at each of the first two houses they pass, excusing himself and running inside to beg at each residence for the loan of a pistol. But no one he asks is armed; and by the third house he stops at, Willie has decided to strike off on his own anyway.  He arrives at the house and soon discovers it’s a ruined cabin, and dejectedly turns back for town.

But on the way, he passes by the Canfield’s house, where Viriginia is strolling in the yard, and Willie takes the opportunity to reconnect.

A delighted Virginia invites him to dinner that evening, and an equally-delighted Willie accepts. The rest of the family is initually just as delighted that Virginia has met a charming fellow and look forward to meeting him at dinner – but are stunned to see that it’s Willie.  The Canfield sons scurry for the gun cabinet, but Papa Canfield stops them – it would be a violation of their code of hospitality to kill him while he is a guest in their home.  (And besides, the Parson is also due for dinner as well.)  He makes them all promise to be perfectly fine to Willie during dinner, but the second he leaves the house, he’s done for.  Willie, meanwhile, has consulted with the family butler and learned whose house he is in.  By the time all assemble for supper, things are a little….tense.  And almost as soon as they are done, Papa Canfield all but strongarms Willie to the door, telling him through a grit-teeth smile that he must come back again some time.

Willie dawdles as long as he can – “losing” a hat, “forgetting” an umbrella – and the Parson finally decides to take his leave first. But a storm has come up outside, and Papa Canfield declares that it’s not a fit night for anyone to travel and invites the Parson to stay with them for the night.  As Virginia shows the Parson upstairs, Willie follows, inviting himself to stay as well.

Willie is still lingering in the house the next day, knowing he’s done for if he leaves.  Fortunately this gives him a chance to sweet-talk Virginia more.

But Papa Canfield finally takes her aside and tells her who Willie is. The initial shock causes her to reject Willie, and he starts to leave, dejectedly – then realizes one of the Canfield boys is laying in wait outside.  So he takes a somewhat desperate measure. The Canfields figure things out soon enough, though, and the last act of the film is a zany chase scene, with Willie leading the Canfields on a madcap chase as he tries to escape on horseback, by train, and then a raft down river. Virginia, who has by now regret spurning him, sees him struggling with his raft and sets out to rescue him in a rowboat – but she too founders, and soon both are in danger of being swept over a waterfall, forcing Willie to somehow attempt a daring rescue. 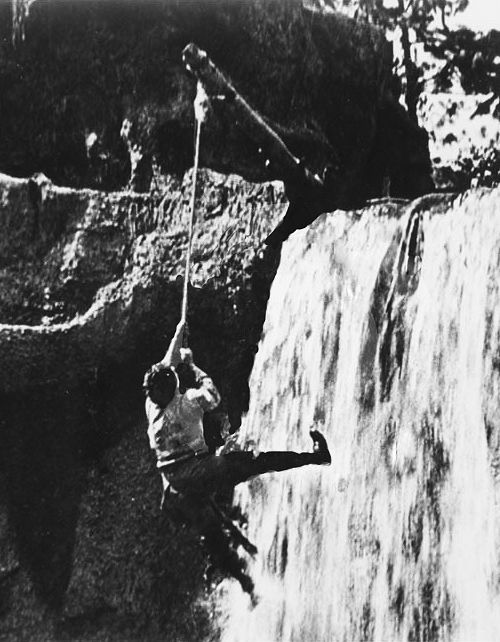 My words do not do this justice.  I repeatedly laughed out loud watching this – there were moments that were straight out of Warner Brothers cartoons. Keaton’s performance only underscores the comedy; any kind of wide-eyed mugging in the midst of the slapstick would be overkill, but Keaton’s famous deadpan face is the perfect foil for the action. There is a take he does to the camera when he realizes he’s about to be pulled off a cliff that had me howling.