Sergei Eisenstein’s film was commissioned ten years after the conflict in 1917 which gave rise to the Soviet Union. I very briefly considered reading a simple history of events so I would have a better grasp of what I was watching, but ultimately went in blind; this was meant to be a propaganda film, I reasoned, and I thought a naïve outlook would let me see the propaganda for what it was. 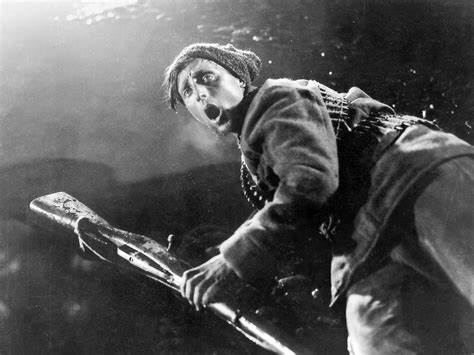 Save a moment or so of confusion over names and people, this was largely the case.  Eisenstein has a really heavy hand with his message, using lots of pointed imagery and montages to drive home his points. I may not have ever heard of the pacifist “Menshevik” party, for example– an alternative party to the Bolsheviks in the initial Soviet Congress – but Eisenstein kept intercutting their words with shots of a team of effete harpers, so clearly I was meant to think their message was airy and fantastical.  I also may not have ever heard of Alexander Kerensky, an intermediary government leader in opposition to the Bolsheviks – but Eisenstein kept showing him posing next to statues of Napoleon, so I was definitely meant to think he was a power-hungry dude.

Eisenstein liked to use statues in his symbolism a lot here. In addition to the Kerensky/Napoleon montage, there’s also a sequence when Kerensky is assembling his ministers inside the Winter Palace and is compared to a clockwork peacock.  There’s another sequence where a group of women is being trained how to shoot rifles, under the watchful eye of a statue depicting a mother with a child taking its first steps.  The whole film starts with a bunch of peasants working together to pull down a statue of Tsar Nicholas IV.

The Nicholas statue makes a return during a sequence critical of the provisional government that initially took control of Russia, before the Bolsheviks.  All that actually happens is that the government rallies people to defend Petrograd “in the name of God and Country”.  But those title cards are intercut and mixed in with shots of St. Basil’s Cathedral and ornate statues of Jesus, giving way to shots of Buddha statues, Aztec idols, and suchlike, giving way to overly-ornate medals on various establishment generals’ shoulders and chests – culminating in a sequence of the Tsar Nicholas statue re-assembling itself.  “God and country”, Eisenstein is saying, is shorthand for “the status quo”.

However – as effective as this film is at propaganda, it is pretty ineffective at storytelling. I grant that it was meant for an audience that already knew the events of October 1917, and knew who Korlinov and Kerensky and the Cossacks were, and what the ship named the Aurora did and why we should care.  But even the Soviets didn’t like it; critics panned its overly-stylized, gimmicky techniques, and the rest of the public just plain didn’t get it – they got the propaganda alright, just like I did, but they were looking for other things, like a plot.

And ultimately that’s where the propaganda falls flat.  I knew that I was supposed to think Kerensky was a sort of empty figurehead, but I wasn’t really given any indication as to why I should care what he did. Lenin was put forth as a super-cool guy, but his super-cool status seemed disconnected from anything else. There were a couple instances of thrilling heroic action sequences, but those were momentary, and moreover they spoke for themselves.  An early sequence of the provisional government squelching a rebellion is also haunting; the government shoots rioters and then raises a drawbridge to cut of their escape. Eisenstein takes pains to show us a couple of bodies stuck on the drawbridge, including one of a horse who was killed in the crossfire; the rising bridge leaves the horse pathetically dangling in midair for several minutes before it finally falls.

Those sequences speak for themselves, however. They didn’t need any still shots of statues of knights or whatever to underscore them.

So what to make of October?  Ultimate this was a very specific example of a specific filmmaker’s unique vision, and an example of how editing techniques can get an emotional tone across.  But in terms of being a complete film, it’s lacking.