I admit I’ve got a bit of a soft spot for Art Deco, but still one of the things that struck me about Metropolis was just how beautiful it looked.  The city-of-the-future that is our setting is full of gracefully towering spires and elegant archways bedecked with glimmering lights.  Scenes are staged and filmed with tremendous care and attention to light and color, motion and movement.  Some details may not be realistic, but everything is beautifully detailed. 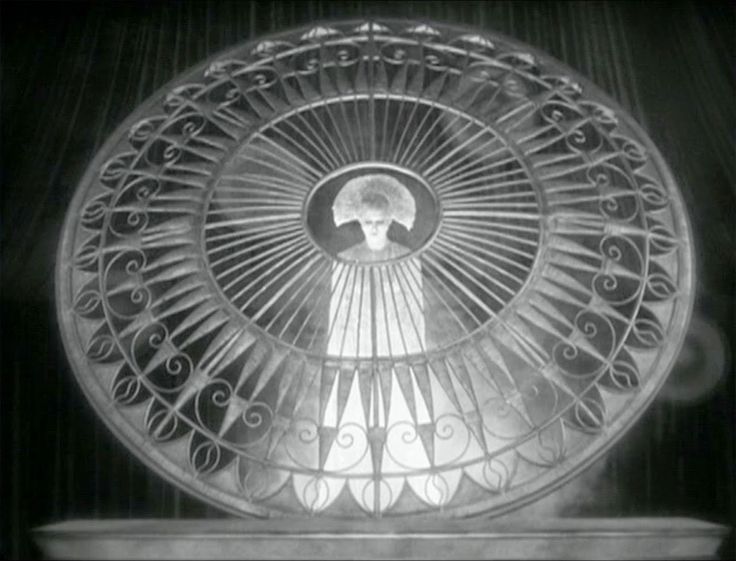 There’s a chance you may have heard of the plot, but just in case – “Metropolis” is a futuristic city run by one man, Joh Frederson; the rich and powerful idle away their time cavorting in pleasure gardens high in the city’s towers, while the working class lives underground, spending their lives manning the machines on a round-the-clock schedule to keep the city running. 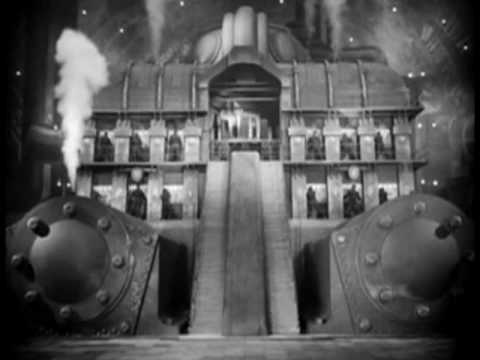 One day, Maria – a woman who basically runs the workers’ day care – invites herself and the kids up to see the rich folks’ pleasure gardens, giving rich and poor a chance to have a look at each other before she calmly brings them all back down to the depths again. But she’s caught the eye of Joh Frederson’s son, “Freder,” who heads down to seek her back out.  But instead he has his first glimpse at how the workers in Metropolis live, and is horrified; at one point he imagines the machines are a giant demon, ruthlessly eating the workers alive.  From then on, he has two goals – to reconnect with Maria, and to come to the aid of Metropolis’ lesser-off citizens.

His father is less than thrilled with this, though, and consults with the city’s finest scientist and inventor, C.A. Rotwang; Rotwang has just invented a robot, and Joh persuades him to fit the robot out like Maria. The real Maria is a pacifist, but his plan is to have Robot Maria start a rebellion so he can have an excuse to call in his thugs and break things up for good.  Rotwang agrees, but also secretly launches his own plan to have Robot Maria moonlight in the Metropolis strip clubs to cause a little chaos among the rich folk as well. 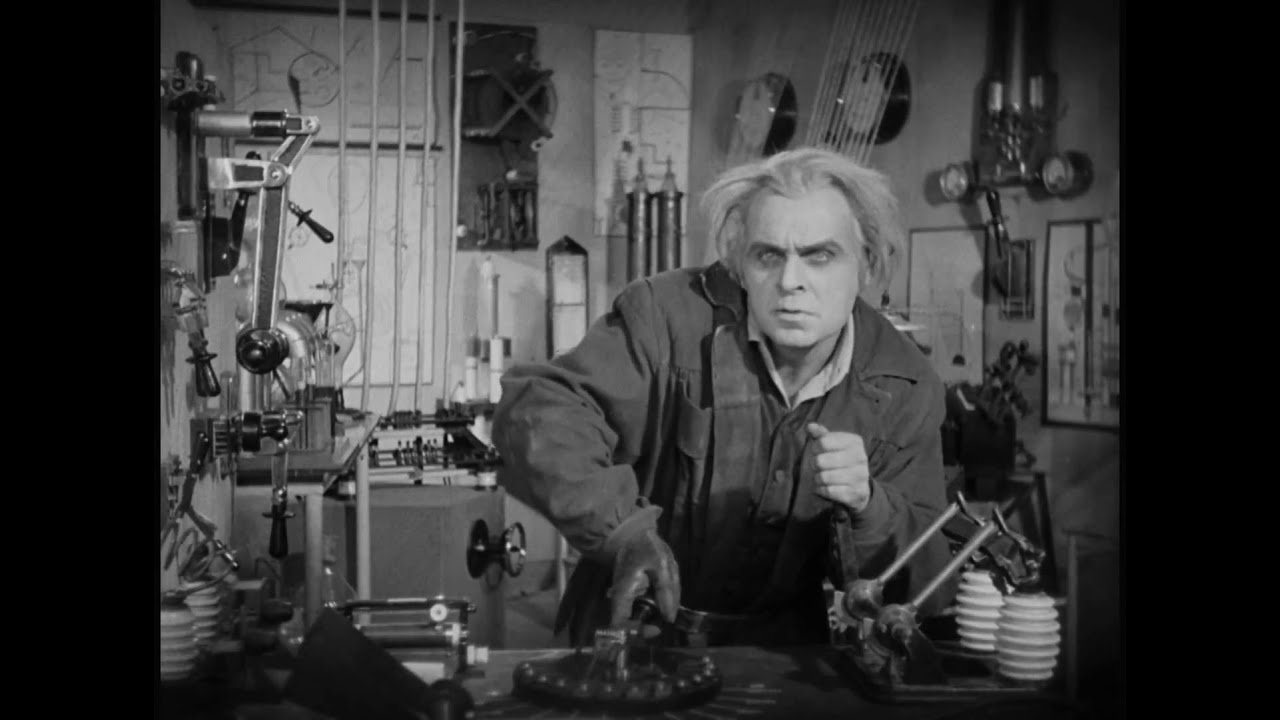 A word about Maria, actually – both versions are played by actress Brigitte Helm, in what was her movie debut at the age of only eighteen.  Both performances are notable – no real over-acting, and a limited amount of “look at the pretty girl in soft focus” beauty shots.  Helm does use a couple of obvious signifiers to distinguish Robot Maria from Real Maria – namely, heavy black eyeliner and some muggy winky faces – but they’re used sparingly, and it’s unclear whether these choices were Helm’s or Lang’s.

I keep coming back to how the film looks.  The plot and theme are notable themselves – a message best summed up with the film’s famous epigram about how the heart needs to be a mediator between the hand and the mind – but the imagery is what really grabbed my attention, over and over.  The opening shots of a series of gears give way to Metropolis’ workers mechanically marching to the elevator to start their shift – as another group of workers ending their shift also marches away, moving much slower. 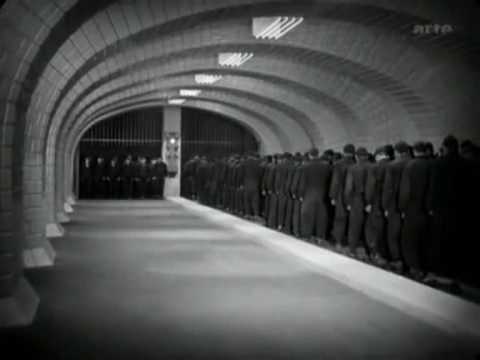 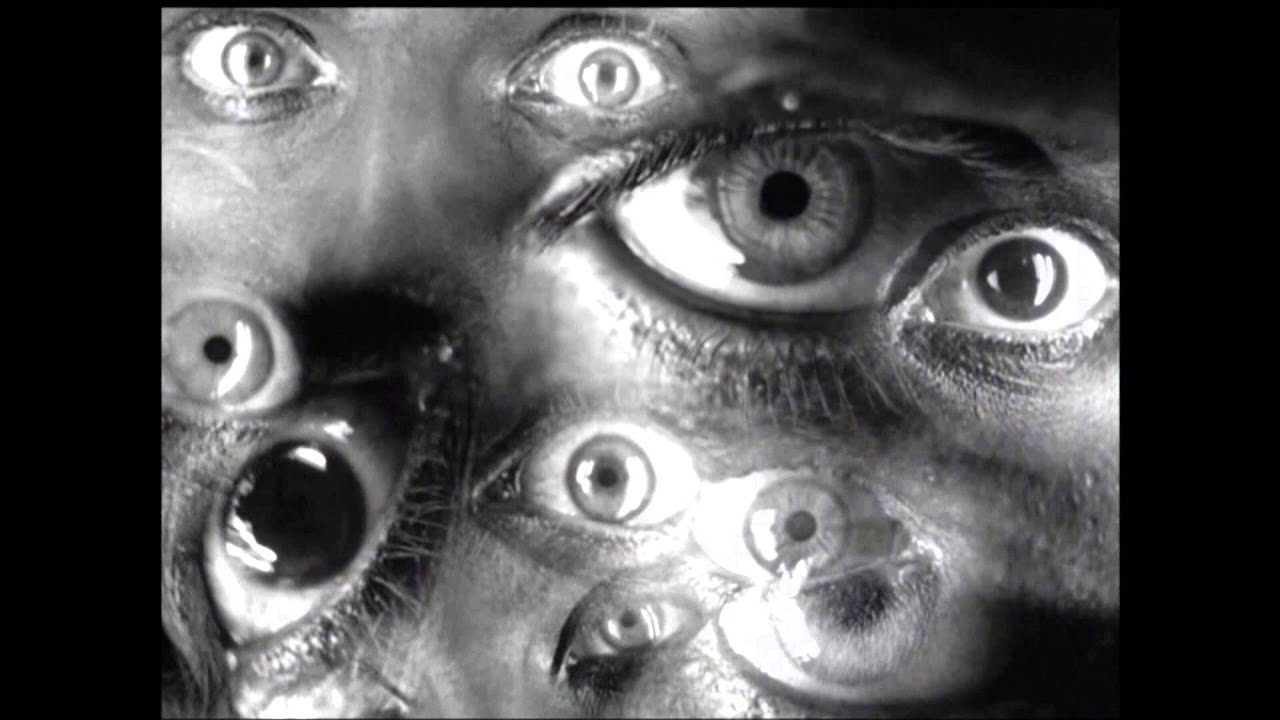 Meanwhile, a delerious Freder – who’s just had a run-in with Robot Maria after an emotional moment in a Cathedral – imagines Maria as the Whore of Babylon. Some critics point to Metropolis’ influence on other sci-fi films like The Matrix and Blade Runner, but the visuals have had a stronger impact on music videos.  Janelle Monae’s “Archandroid” character is a nod to the initial appearance of the Robot from the film (as is C-3PO from Star Wars, while we’re on the subject).  There are nods to the film in Lady Gaga’s videos for “Born This Way”, “Alejandro”, and “Applause.”  Twenty years earlier, Madonna all but re-made the film for her video for “Express Yourself.”

Queen went even further and outright used some clips from Metropolis in their video for “Radio Gaga.”

Queen may have actually had Metropolis on the brain for another reason, though.  That same year, Italian music producer Giorgio Moroder bankrolled and released a new edition of Metropolis that I can only assume was meant to appeal to a “modern” audience.  The film was already a bit of a hash at the time; during its original release, like many longer films, it suffered from some cuts at the hands of studio heads, and cinema scholars figured much of the original footage had long been lost.  Moroder’s version re-introduced some multicolored filters of the kind often used in German expressionist cinema, but cut the film’s running time and cut out several shots.  Moroder’s version also had a rock-score soundtrack, heavily using music by Queen, Bonnie Tyler, Adam Ant and other 80s stars.  (Full disclosure: I actually saw this version on VHS sometime in the early 90s.)

Miraculously, though, in 2005, cinema scholars discovered a nearly-complete print of the original film in Argentina.  Using that print, scholars were able to reconstruct and release a version in 2010 that restores most of the original footage (and ditches the rock for a more traditional score).  That is the version to track down if you can.