1922’s Haxan really tries to go for a mixed audience. Ostensibly, it’s a documentary – billing itself as “A History of Witchcraft Through The Ages”. But director Benjamin Christensen used the then-novel technique of dramatizing certain scenes – and his dramatic recreation have a little too much more nudity, gore and creep-out details to be entirely necessary.

Inspired by a copy of the Malleus Maleficarum he found in a used bookstore, Christensen kicks things off with a dry anthropological lecture, punched up with the occasional illustration, about how different societies held beliefs in evil spirits, including the Judeo-Christian world. By the time Christensen is showing a chart of the celestial spheres and the purported location of heaven, you’re left thinking that this is indeed all pretty stuff, but it sort of feels like a really old junior high film strip. And then Act 2 starts. The bulk of the film is taken up with a pair of dramatized sequences demonstrating medieval inquisition practices and folklore about witchcraft and Satan. The Devil appears hither and yon, startling priests and seducing women.  Dog-headed demons urinate on churches. There is a black mass where the parishioners line up to kiss a demon on the backside. A group of women huddles in a basement, mixing potions out of things like dried corpse fingers and cat feces.

And did I mention: nudity.

Midway through it all, Christensen works in a how-it-usually-happened case of witch hunting, introducing his tale with a scene of a beggar woman asking for food at a middle-class house where the husband is ill.  At first, the kindhearted mistress of the house feeds her.

But a less-sympathetic member of the house suspects the beggar woman of bewitching the master of the house, and accuses of her of witchcraft. However, the tortures of the inquisition lead her to accuse the family back, and before long the mistress of the house is herself imprisoned for suspected witchcraft by the time the sequence ends.

For all its prurience, though, Haxan takes a sympathetic view of the medieval witches.  One sequence with our beggar woman points out that she’s older, unmarried, ill, and poor – and who in her condition wouldn’t see the appeal in a belief system that promised to slake those unmet desires?

Christensen also devotes some footage to the tortures imposed on those accused of witchcraft, through a fairly academic illustration of some of the inquisitors’ tools. Christensen claims that one of the women in his cast wanted to try the thumbscrew, as she was skeptical of its effectiveness – but he then claims that he elicited “the most shocking confessions” from her through its use.

The last few dramatizations concern a contemporary woman, whose story is intercut with a vignette of a medieval nun.  Both find themselves strangely compelled to commit some transgression; the contemporary woman suffers kleptomania and is compelled to steal a ring at a jewelers’, while the nun is compelled to deface her convent’s altar. And yet the two women are treated very differently, Christensen shows us; the kleptomaniac tearfully returns the ring and checks into a sanitarium, while the nun is confronted by her Mother Superior, but cracks and sparks a riot in the convent.

Both women, Christensen argues, were suffering from psychological pressure rather than demonic.  A more contemporary understanding of mental illness offers a better understanding of the compulsions, anxieties and other social and mental difficulties that would have branded women as witches in the past. The film closes with a few scenes that contrast the cruelties of the inquisition with some scenes of women being treated at sanitariums and fed at homeless shelters, emphasizing the kindness and charity of the modern response.

Audiences didn’t quite know what to make of the film; the nudity was a little too intense for many, and the film didn’t get a showing in the United States for decades.  And some of the demons come across as more ridiculous than anything else; one of the beggar woman’s confessions is that she has given birth to demons, and Christensen “stages” that with a clip of her miming labor as a series of people in animal-headed costumes crawl out from under the table where she lies.  The film’s “Satan” also has a puzzling habit of keeping his tongue continuously stuck out and waggling. 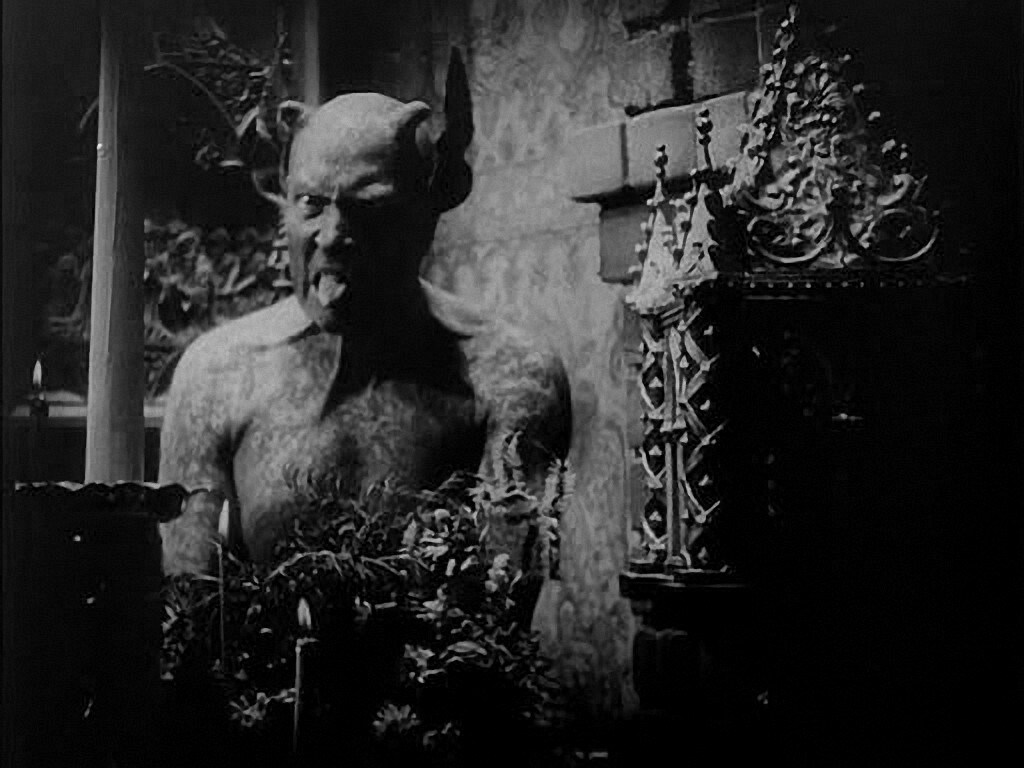 But towards the end, there’s an affecting sequence; a series of portraits of poor, older women whom Christensen said would have been targeted as witches – a woman with Parkinson’s, a woman with one eye, a woman with a hunched back from osteoporosis.   The hunched back, especially, matches with the stereotypical idea of a “witch”, but the woman with the hunch back in the film is a sweet, smiling little woman, patiently turning in a circle so Christensen can film her.  And it reminded me that my own grandmother also had a bit of a hunched back in her 80s as well.  It drove home hard the notion that Christensen was going for – that nearly all of the women affected by the Inquisition were no doubt just poor and sick older women with no resources who met cruel ends.

The hubba-hubba nudity was no doubt there to pull audiences in, but it also sets audiences up.