Oh, I didn’t want to watch this…Greed was a 1924 Erich Von Stroheim epic, which was cut down from its original nine-hour running time to being just shy of two hours after the studio intervened. The missing seven hours of footage had been assumed lost, but film historians have found enough still photos and shooting scripts that they have edited together a sort-of thing that gives a flavor of Von Stroheim’s vision, and clocks in at four hours.  Classic masterwork or not, four hours is a long time to dedicate to a movie without a break.

But this turned out to be…not bad.  Dammit.

Based on an 1899 novel, Greed is the story of MacTeague (the film never reveals his first name), a big galoot of a guy working in a California gold mine. His parents are also in the same mining town – his mother is a cook in the mine’s kitchen, and his father is a lush. Mom MacTeague fears her son is destined for the same path as her father, so when a traveling frontier dentist comes to town, she begs the dentist to take her son on as an apprentice. MacTeague stays with the dentist for five years, until his mother finally dies, leaving him a modest inheritance of $250; he uses it to settle down in San Francisco, buy his own storefront and start his own practice.  For the next few years, business is modest, but steady, with MacTeague mostly serving the people in the boarding house where he lives and on his street, including a guy named Marcus, who becomes one of his good buddies.

Then one day, Marcus brings his girlfriend Trina by; it seems they’d been on a merry-go-round at a carnival and Trina broke her tooth, so Marcus brought her to his buddy MacTeague to fix it.  MacTeague agrees, but is also instantly smitten with Trina.

Trina, however, just wants her tooth fixed at that point. She’s nervous about being “permanently disfigured”, and to calm her nerves while she waits for him to work on her, she buys a lottery ticket from the odd-job woman working at the boarding house.

But MacTeague devotes himself to helping her, seeing her daily for a solid two weeks in an effort to design the perfect replacement crown for her; he also falls even more in love with her, and finally confesses his feelings to Marcus.  Marcus is initially jealous when MacTeague tells him, of course, but after a couple minutes admits that he’s not the best for Trina and gives MacTeague his blessing to go after her, even offering to introduce MacTeague to Trina’s family.

Trina and her family welcome MacTeague; she’s happy with her tooth, first, but she soon warms to MacTeague the man as well.  But after several months, she is still reluctant to marry him.

But then – the long-forgotten lottery ticket pays off, as Trina learns she has won five thousand dollars!  As she shares the news with MacTeague, Marcus, and the rest of the gang, she wonders aloud what she will do with the money.  “Why don’t you and MacTeague get married with it?” someone suggests.

And so they do. 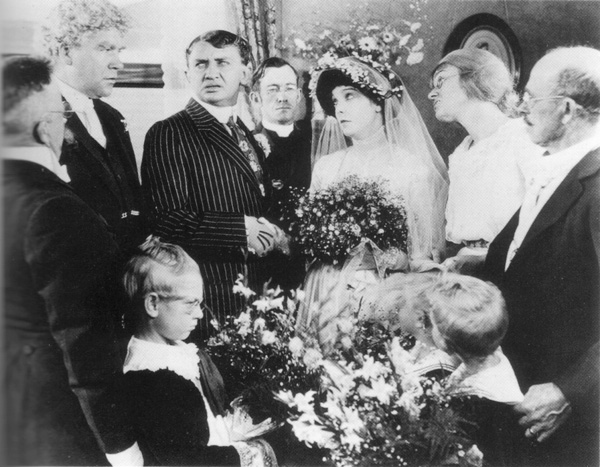 Initially all is rosy – Trina buys MacTeague a big gold-plated tooth to hang in his storefront as an eye-catching ad, and MacTeague in turn presents her with a loveable pair of pet canaries. Marcus does grumble a bit – Trina’s new fortune gives him some sellers’ remorse for letting her go – but he keeps his peace, finally moving out to the country to start a ranch.

In time, though, Trina becomes strangely miserly, stowing her winnings in her uncle’s safe. Then she starts hoarding all the family cash in her hope chest and taking it out only to admire and polish it.

Soon the health department catches up with MacTeague, barring him from practicing dentistry without an official license.  MacTeague starts doing odd jobs to make ends meet, and Trina becomes even more fanatic about saving money.  But MacTeague knows she has it, and gets into such a fit of rage one evening that he tortures her by biting her fingers until she gives him some of her hoard.

Eventually MacTeague breaks into her chest, steals the money and leaves.  Trina’s fingers turn so infected they need to be amputated. Abandoned, robbed, and an amputee, Trina gets a job as the cleaning lady at a local elementary school, sleeping in the back room.  She finally remembers the five thousand with her uncle, and asks him for it; although instead of using it, she literally sleeps with it.

MacTeague, who’s finally spent through her $450, tracks her down and begs her to take him back. She refuses. She also refuses his request for some money for a meal, and a desperate MacTeague attacks and robs her again, leaving her horribly injured and fleeing town.  And as luck would have it, he end up near the same town where Marcus now runs a ranch; Marcus sees the “Man Wanted” posters going up in town and eagerly joins the posse heading off in search of MacTeague, eager for revenge.

So, it was okay.  Von Stroheim stays behind the camera this time; I wasn’t as impressed with his performance in the last thing he directed, so him staying away was a welcome development.  But his attention to detail and his commitment to verisimilitude were still there, and probably did him in; for some scenes set in Death Valley, Von Stroheim insisted on shooting in Death Valley, at great risk to the health of his actors and the functionality of the equipment (he had to wrap iced towels around the camera during shooting to offset the extreme heat).  So Von Stroheim was already on thin ice when he brought his original cut to the studio heads.

The nine-hour version he showed them was only ever screened for those men, that one time. Von Stroheim reportedly sat in the front row, staring straight ahead at the camera, subtly shaming them into watching the whole thing uninterrupted along with him; he didn’t include any breaks for bathroom runs, meals, or anything. It was too much – the studio insisted that they would be making cuts, and that was that.  Von Stroheim objected strenuously, and the studio insisted just as strenuously; at one point Von Stroheim got into a fist fight with Louis Mayer, the head of MGM, over the cuts.

But cut things they did.  And, based on what I saw restored, I would be inclined to agree with half of it.  …I actually should speak to how the restoration I saw worked first: the actual cut footage had long since been destroyed, but historians found some of Von Stroheim’s notes about what some of the missing title cards would have been, as well as some corresponding still photos.  Those both have been edited back into the four-hour version of the film – lengthy takes of the still shots interspersed with the title cards, sometimes with a close-up on key details from the image.  It’s a bit jarring at first, but I got used to it quickly.

The biggest cuts were made in two sub-plots Von Stroheim intended to show as parallel stories of how other couples handled money; first, with the odd-job woman who sells Trina the lottery ticket. For the first part of the film she’s a poor dreamer, making up stories about how her family once owned a solid gold dinner service just to cheer herself up. Another fellow in the boarding house marries her, then asks whether she knows where the set is.  He keeps after her about how she should track the set down so they can have it; but when she keeps refusing, he finally kills her.  The other subplot concerns a pair of elderly boarders in the boarding house – the veterinarian Dr. Gilpin, and the elderly Miss Baker, who have been living in rooms next door to each other and admiring each other from afar. Near the film’s end, Dr. Gilpin comes into his own five thousand dollar windfall, and proposes to Miss Baker; she’s unconcerned about the money, though, and just wants him. They use the money to install a door in the wall between their rooms, and then marry. The story of Dr. Gilpin and Miss Baker is sweet, but honestly I wouldn’t have missed it.

The performances in the main story are compelling enough, though, that I do regret some of the cuts to that story; Trina’s family is an especially quirky lot, a family of German immigrants with three lively little kids and a papa who likes to lead them on mock “parades” to get them into line.  It may be a little unnecessary – but in one of the early scenes, when MacTeague is first meeting her family, it’s a charming lot of detail, winning the hard-luck MacTeague over into a whole new idea for how his life could be.  It’s part of what makes him fall for her – and adds to the poignancy when their romance, which did start out so well, gets corrupted by greed.