With 1922’s Foolish Wives, we also have our first meeting with a larger-than-life filmmaker – Erich von Stroheim, the son of an Austrian Jewish hatmaker who emigrated to the United States at the age of 24 and claimed to be an Austrian count.  He found his way west to Hollywood, and after an unofficial apprenticeship to D.W. Griffith (he was one of several assistant directors on Intolerance), and after appearing in some World War I-era films as the German villains, he struck out on his own, making and starring in his own work.

His lead role in Foolish Wives is a bit of a wink to his past.  He plays “Count Wladislaw Sergius Karamzin”, one of a trio of Russian con artists trying to live high on the hog in Monte Carlo between the wars; it’s never established whether he really is a Count, but since his “cousins”, a pair of women on the run from Moscow, certainly aren’t royalty, it’s safe to assume he isn’t either. But they have much of the glitterati fooled, thanks to criminal instincts, a stylish home, and regular visits to a local forger to purchase fake bank notes.

But the Count’s real M.O. is seduction – winning over wealthy women and swindling them out of money.  Their maid, Marushka, is already wrapped around his finger, and throughout the film reminds the Count of his promise that one day they would marry. 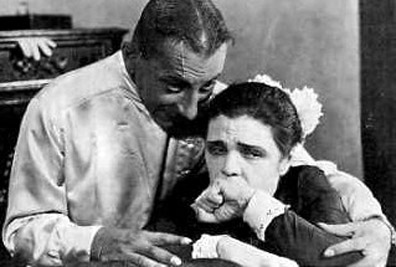 However, since she only has a few grand, he has bigger fish to fry. Like, say, the wife of the newest American envoy to the city. Helen and Andrew Hughes arrive in Monte Carlo amid much pomp and circumstance, and the Count quickly notices that Andrew is a bit older and stodgier than his wife – and both are clearly rich. He gallantly offers Helen his acquaintance so that she has someone to hang out with on the dull days when her husband has diplomatic duties, and Helen readily accepts, soon spending more time with the Count and his “cousins” than she does with Andrew.

On one notable outing, Helen joins the Count and his “Cousin Olga” on a day trip to a small nearby town. While Olga relaxes at an inn, the Count and Helen rent a rowboat to do some exploring.  The Count seems strangely unconcerned about an impending storm, and when it finally strikes, he seems unusually certain that they’ll be able to find shelter in one of the local neighbors’ cottages for the night.  (This isn’t the first time the Count has done this, mind you.)  At first all does seem to be going to plan – they “discover” the peasant woman’s cottage, and she sets up a bed for Helen and relegates the Count to an easy chair – but when both women have fallen asleep, the Count tries making a move – only to be interrupted by a traveling monk who is genuinely lost and in need of shelter.

The party returns to the city the next day; Helen’s husband is unsuspecting, as Olga has sent the message along that all three stayed at the inn for the night.  The Count renews his efforts to win over Helen, further discomfiting Marushka.  The Count is even working on a third conquest – the daughter of their forger, a developmentally disabled girl who is awed by the Count.  It’s clear that the Count sees her as just a bit of skirt on the side, though.

Finally, The Count makes a plan to corner Helen during a society ball, whisk her to another room for an intimate dinner and put the moves on her there.  If she gives in, he’ll have made his score – if she resists, she can be blackmailed for being alone with him.  Luckily for the Count, it seems Helen is on the verge of giving in – but then Marushka, driven mad by jealousy, snaps and starts a fire in the tower where the Count and Helen are meeting….

Despite all that, the plot felt a bit…slim, and I actually found myself nodding off a few times while watching. But the original run time Von Stroheim had in mind would have been absolutely interminable – he originally wanted the film to run a full six hours.  The studio said no, however; especially after seeing the bill for the shots that von Stroheim was doing – using real caviar in meal scenes, taking copious takes of each scene for “safety”….instead of six hours, the film clocks in at a bit more respectable two hours and change.

There is one scene I quite liked, though.  The first time the Count meets Helen is on a hotel balcony; she’s just seen Alfred off with the Prince of Monaco, and has settled in with a book. 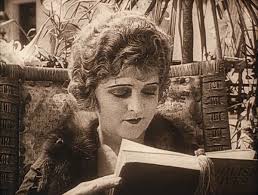 The Count follows her, and for the next five minutes proceeds to go to progressively greater lengths to catch her attention – edging closer and closer in his seat, paying a messenger boy to page him “and the louder the better”, and such. But Helen seems to find it ridiculous, pausing each time only to give him a cocked-eyebrow glance before returning to her work. Finally  the Count gives up and just asks someone to introduce him to Helen.

I admit I was a little disappointed to see how easily Helen fell for his antics after they were introduced.