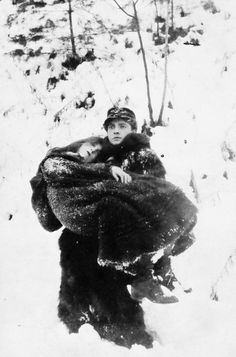 Well, hello Mr. Griffith, we meet again.  You too, Mr. Barthelmess (and nice to see you out of yellowface, unlike with your last role).

Griffith chose another play for this outing, adapting a work from the 1890s. Lillian Gish is Anna Moore, a naive country girl from New England sent to visit wealthy relatives in the city, to charm them into a loan of money for her and her mother. But instead she catches the eye of Lennox Sanderson (Lowell Sherman), a slimy playa who cons her into a mock wedding in an effort to get her into bed.

But after a short while, when Anna reveals she is pregnant, Sanderson confesses the truth and abandons her.  Heartbroken, Anna returns to the country, first back to her mother’s arms, then to a boarding house where she delivers the baby with the assistance of a sympathetic doctor; her landlady, meanwhile, is fearful of scandal from harboring an unwed mother.  When Anna’s baby dies of a fever, the landlady throws her out as well.

Anna wanders the country, bereft, knocking on doors and looking for work. She ultimately finds her way to the tiny town of Bartlett, and the farm of elderly Squire Bartlett, introduced to us as a “stern Puritan” who initially turns her away for fear that she is a “loose woman”.  Fortunately, Mrs. Bartlett is somewhat kinder and talks him into taking her in, introducing Anna to her son David (Richard Barthelmess, whom we last saw in Broken Blossoms) – oh, and she should meet their neighbor, Lennox Sanderson, who will be eating dinner with them tonight!  During their uneasy reunion, Sanderson tries to convince Anna to leave – but she refuses, agreeing only to keep silent about their history.

There’s a cozy start to the second half of the story, as we meet some of the town’s “characters” – the bumbling police chief, the town gossip, and a scatterbrained lepidopterist in Coke-bottle eyeglasses everyone calls “The Professor”.

The Professor soon turns sweet on Squire Bartlett’s niece Kate, who’s come on an extended visit; the Bartletts, though, have been encouraging her as a match for David. But Kate is more interested in Sanderson – and as for David, he soon falls for Anna, tenderly confessing his feelings during a walk around the mill pond; but Anna, ashamed of her past, refuses him.

And she refuses again that winter, when David proposes to her. But his love inspires a bit of hope in her, and she timidly asks the Squire if – hypothetically – he would have found a way to forgive her if she really had been the loose woman he thought she’d been when they first met.  Never, he thunders – “When the law’s broke, it’s broke, ain’t it? A wrong’s a wrong and nothin’ can make it right.”  And sure enough, when the town gossip discovers Anna’s secret and tells the Squire, he hurries home and orders Anna – who is at that moment settling down to serve dinner to the whole family and to Lennox Sanderson – that she is to pack her things and leave that instant.

David comes to her defense, but Anna tells him it’s true – and angrily reveals the truth about Sanderson. An incensed David attacks Sanderson, and while the rest of the family is distracted breaking up the fight, Anna slips out, fleeing into a blizzard.

But David soon notices her gone and gives chase, tracking her through the storm to where she has wandered out to the river and trapped herself on an ice floe drifting downstream…

Way Down East is comparatively simple (at least for Griffith).  But adding the ice floe rescue – something not in the play – made this his most expensive film yet.  The scene filmed on location in Vermont in the dead of winter, where the ice was so thick that they had to use dynamite to break off a floe for Gish to lie on.  Griffith also had to keep a small fire going underneath the camera because it kept freezing.

Gish was the real trooper – she had the idea to lie on the floe with her hair and one hand hanging into the icy water. She got a severe enough case of frostbite that she had a partially impaired hand for the rest of her life.

….I could actually have done without the ice scene (sorry, Lillian). David has more than proved his loyalty by that point in the film, and Anna’s forceful denouncement of Sanderson is enough to convince the Squire that he’s misjudged her.  Similarly, some of the local-color portraits of the townspeople feel unnecessary; the Constable is introduced early on to gossip about a robbery at the local post office, and then pretty much disappears for the rest of the film.  The Professor is also obviously introduced solely to be a consolation prize for Kate.  Actor Creighton Hale makes the most of it, however, especially during a “country dance” scene where his Professor is hilariously inept.

Audiences of the time ate it all up, rendering this the fourth-highest grossing film of the silent period.