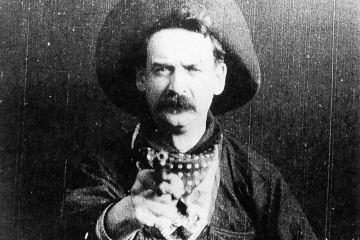 Wow, look at that! A recognizeable plot!

This takes a huge leap forward from A Trip To The Moon – it’s much easier to follow the action now. There are very few scenes with more than just three people in them – and when there are, it’s easy to follow what’s supposed to be happening and who to pay attention to.  I know I keep harping on that, but this is a basic element of dramaturgy and stagecraft that was getting overlooked in the last film; not because the filmmakers were ignorant, but because film was so new that people were figuring out how it worked.

Even though it’s easier to follow, the plot here is still a little thin, however – a team of train robbers hold up first the train station, and then a train itself, making off with papers from the express car and with valuables pilfered from the passengers at gunpoint. But the station master is revived by his sweet daughter and sounds the alarm, raising a posse to give chase and recover the goods from our villains. The end.  Ben Hur it ain’t, but not bad for only twelve minutes.

A few details made me chuckle.  A number of people get shot over the course of this film, and three of them “play dead” in exactly the same way – coming to a sudden stop, throwing arms straight up over their head, and then sinking to the ground while pirouetting.  It’s not clear whether they’re hamming it up to “sell the action”, or they’re just…hams.  My money’s on the former; another scene with the station master’s daughter has a similar degree of Big Acting, where she pauses in the middle of trying to wake her father to clasp her hands and raise them in prayer for a second, but the actress is a child, and I don’t see her trying to upstage anyone on purpose.

Also, this kind of acting was The Done Thing at this time, on stage especially. This was a long time before naturalistic acting; the goal wasn’t to imitate life, it was to evoke emotion. I’ve seen an actors’ instruction book from the period, which spoke of some very specific poses, gestures, and body language they were expected to assume during different scenes, depending on the circumstances; if you were trying to show fear, you had to stand one certain way, if you were pleading you stood another way. Some of the more histrionic poses may have been an offshoot of arcane acting habit that would have made perfect sense at the time – but just look ridiculous today.

The posse was silly for an entirely different reason. We meet them all at a country cabin where they’re having a lively squaredance, complete with bonnetted ladies, and at one point they yield the floor to a gentleman in a bowler hat who does a sort of tapdance while the other men all shoot at his feet. A moment later, he runs off and the others resume dancing a bit before the sheriff comes in to recruit them all for the posse.  And….scene.   I think this was just sort of an effort to add some “local color”, but that was still one out-of-nowhere shot.